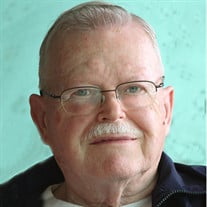 The funeral service for Donn Harris, a resident at the Central Todd County Care Center in Clarissa, and formerly of Eagle Bend, will be held at 11:00 a.m. on Saturday, January 26, at the Faith Lutheran Church in Eagle Bend with Pastor Del Moen presiding. Visitation will be held at the church on Friday from 6:00 until 8:00 p.m. and will resume at the church on Saturday from 9:30 a.m. until the time of the service. Let it be known that after 86 years on this Earth, music maker Donn Felton Harris reached his final coda during the earliest hours of January 22, 2019. His true love and duet partner, Sharon Harris, with whom he had journeyed through 59 years of matrimony, sang to him as he took his final breaths. Her hands sweetly holding his, as a glittering snow fell gently outside of the Central Todd County Care Center in Clarissa, Minnesota.  Born on September 25th, 1932, he was dotingly raised by his mother, Ethyl and Grandma Marie Carlsen. Donn's quenchless thirst for music took hold of him soon after he played his first notes on a trumpet in 5th grade. He went on to take private lessons every week for 14 years and played in both the concert and marching bands, jazz ensemble, and trumpet trio at West High. He also sang in his church choir, performed with the Honeywell Concert Band; and thrived in the orchestra at the Minneapolis College of Music. It was there that he earned his Bachelor of Music and Master of Music degrees, while he enjoyed being the president of his music fraternity, Phi Mu Alpha. It was through music that he discovered both creative freedom and structured discipline, tenets that would guide his entire life. He joined the National Guard, eagerly looking forward to playing Reveille each morning, only to find out it was canned music played over the loudspeaker. Nevertheless, he became a member of the 47th Infantry Division Band at the Minneapolis Armory and finished his last weeks of active duty playing in the 5th Army Band at Fort Ord, CA. Back in Minneapolis during a church choir rehearsal, Donn accidentally dropped  his sheet music and a kind young lady, Sharon Jones, helped him pick it up. They would become life-long singing partners. Married on August 15, 1959, they moved to Wisconsin, where Donn became the K-12 Vocal Music Teacher for 4 years.  In 1962, the couple moved to Eagle Bend, Minnesota as he took on the position of K-12 Vocal AND Instrumental Music Director, a position he would hold for more than 30 years. This meant commandeering the concert band, choir, pep band, jazz band, pop choir, marching band, as well as introducing and teaching music to generations of elementary students, including individual private lessons to every student for all instruments. Eventually even teaching his own grandchildren. His career as a music educator would not have been possible without the constant support and grade/bookkeeping skills of his loving wife and mother to their five children, Sharon. Donn was a lovable perfectionist and self-professed extroverted-introvert. He was a man of few words, but those words meant a lot. His intelligence and sharp wit would often zing with calculated precision when you least expected it. He was an artist with many hues at his disposal, and fiercely passionate with a baton in hand. A great musician and singer, a phenomenal teacher who was energetic, engaging, and patient. He chewed the scenery playing great roles in several community theater productions and was completely unafraid to be silly in front of the entire staff and student body during Homecoming skits or lip sync numbers. He was Donn, with two ’n's. In retirement, Donn enjoyed performing with the Staples Men’s Chorus and Wadena Community Band, as well a community theater with Madhatters and Lamplighter Community Theater. He was also the music director at Faith Lutheran Church for over 50 years. Donn was an extremely kind-hearted man. But also strong. He lived with Parkinson’s as long as Muhammad Ali (over 30 years). Donn taught us that being kind-hearted and strong are one and the same! He was preceded in death by his mother, Ethyl (Carlsen) Harris and father Theodore Harris. He is survived by his wife, Sharon (Jones) Harris, his children, Kevin of Robbinsdale, Carolyn (Steve) of Blaine, Brent (Jan) of Eden Prairie, Shannon (Mary) of Culver City, CA, and Scott (Christina) of Sierra Madre, CA, and his grandchildren, Andrew, Steven, Lindsey, Alex, Brenna, Rosie, and Mackenzie Donn.

The funeral service for Donn Harris, a resident at the Central Todd County Care Center in Clarissa, and formerly of Eagle Bend, will be held at 11:00 a.m. on Saturday, January 26, at the Faith Lutheran Church in Eagle Bend with Pastor Del Moen... View Obituary & Service Information

The family of Donn Harris created this Life Tributes page to make it easy to share your memories.

The funeral service for Donn Harris, a resident at the Central...

Send flowers to the Harris family.