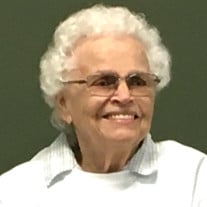 The Memorial Mass Donna Aldrich of Wadena, will be celebrated at 11:00 a.m. on Tuesday, April 23, at the St. Ann’s Catholic Church in Wadena, with Father Aaron Kuhn as celebrant. Friends may call at the church on Tuesday from 9:30 a.m. until the time of Mass. Donna, age 88, passed away on Sunday, April 14, 2019, at the Fair Oaks Lodge, Wadena, MN. Madonna “Donna” Lorraine Aldrich was born to Albert and Katherine “Katie” Johnson on December 27, 1930, in Bluffton Township, Minnesota. She graduated from Wadena High School in 1948 and married Kenneth (Ken) Aldrich on October 11, 1948.  They were happily married for over 66 years. Ken and Donna made their home in Wadena, and in retirement, spent many winter months in Mesa, Arizona. She was active in Girl Scouting, a member of the American Legion Auxiliary for over 50 years, and was the 7th District DFL Chairwoman. She received an invitation and attended John F. Kennedy’s inauguration in Washington DC and entertained many prominent DFL politicians at her home.   She owned Donna’s Ceramics where she taught for many years.  She enjoyed traveling and taking cruises, including several trips to Sweden to research family history. Donna loved camping with the Holiday Ramblers, and was a member of the Wadena Homemakers Group and Red Hat Society. Her hobbies included crafting, oil painting, canning, cooking, and entertaining with friends and family. Donna was preceded in death by her husband Ken in 2015, parents Albert and Katherine Johnson, sisters Marian Ciota and Bernice Brown, and son-in-law William Goedtel. She is survived by children Barbara (Michael) Engelmann of Scottsdale, AZ; Michael of Wadena, MN; Debra Goedtel of Indio, CA; and Mary (Bruce) Evjen of Alexandria; 11 grandchildren, and 16 great-grandchildren; sisters Shirley (Clarence Klauer) Pelletier of East Moline, IL; and Carol (Mario) DeMatteis of St. Michael, MN; along with a host of friends. Burial will be in Calvary Cemetery, Wadena, MN.

The Memorial Mass Donna Aldrich of Wadena, will be celebrated at 11:00 a.m. on Tuesday, April 23, at the St. Ann&#8217;s Catholic Church in Wadena, with Father Aaron Kuhn as celebrant. Friends may call at the church on Tuesday from 9:30 a.m.... View Obituary & Service Information

The family of Donna Aldrich created this Life Tributes page to make it easy to share your memories.

The Memorial Mass Donna Aldrich of Wadena, will be celebrated...

Send flowers to the Aldrich family.