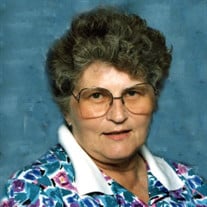 The memorial service celebrating the life of Doris Reid will be held at 2:00 p.m. on Saturday, March 13, at the Johnson-Schuller Chapel in Wadena, with Pastor Jacob Heppner presiding. A public visitation will be held at the Johnson-Schuller Chapel on Saturday from 12:30 p.m. until the time of the service.   Doris, age 86, passed away unexpectedly of natural causes on February 2, 2021, at her home in Wadena, MN. Doris was born to Elvin and Dorothy (Horner) Shultz on March 16, 1934, in Otter Tail County, MN. She attended Henning Public School and completed the twelfth grade.  On June 25, 1951, Doris married Clarence “Fuzz” Wright. They were divorced and after some time, she married Bob Reid in the 1980s. They, too, decided to end their marriage and go their separate ways. Doris met and later married Ralph “Hank” English on February 15, 2001 in Parker, AZ.   Doris worked for several years at the US Post Office in Des Moines, WA. She enjoyed Bluegrass music, square dancing, photoshop and ceramics. Time spent with her family and friends, especially her grandkids was special to Doris. Over the years, she lived in Detroit Lakes, and then Seattle, WA, before returning to Minnesota.  Doris and Hank traveled in their motorhome and Arizona became a warm get-away for them during the winter season.   Preceding Doris in death were her husbands Clarence Wright, Bob Reid, and Ralph English; parents Elvin and Dorothy; son Rodney Wright; infant daughter Kathy Wright; and brothers Dennis, Mervin, and Elvin “Butch” Shultz.        Doris is survived by  her children Rick (Benita) Wright of Buffalo MN  and Randy (Frances Garcia) Wright of Salome Arizona; 7 grandchildren, 22 great-grandchildren & one great-great-grandchild; along with siblings Bob Shultz, Jean Williford, Amy Esko, Peggy Buchanan, and Donna Hardin.    Burial will be at a later date in Woodside Cemetery, Wrightstown, MN.

The family of Doris Reid created this Life Tributes page to make it easy to share your memories.

The memorial service celebrating the life of Doris Reid will...

Send flowers to the Reid family.