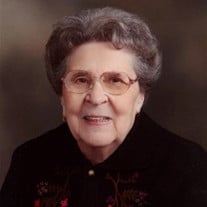 The Memorial Mass for Dorothy Jane Bergman, a life-long resident of Wadena, will be held at 12:00 Noon on Saturday, December 29, 2018, at St. Ann’s Catholic Church in Wadena with Fr. Aaron Kuhn presiding.  Friends and family will gather on the day of the service from 10:30 AM until the time of mass at the church. With family by her side, Dorothy, age 93, passed away on Thursday, December 6, 2018, under the tender care of Knute Nelson Hospice and the staff at Inga’s Place Assisted Living in rural Wadena, MN.   Dorothy was born to Ferdinand Christian and Doris Margaret (Bullard) Hotz on July 21, 1925, in Staples, MN. She attended school at St. Ann’s Elementary and Wadena High School. On November 8, 1945, she was united in marriage with Wallace “Wally” William Bergman at the St. Ann's parish house while Wally was serving in the US Army.   Dorothy was a homemaker who was active in her community as a member of the VFW Auxiliary, and her church as a member of St. Ann’s and the Christian Mothers.  She enjoyed being creative and socializing with her friends in the Sewing Club and liked to play cards and go camping. She also loved spending time with her children and grandchildren whenever possible.   Preceding Dorothy in death were her husband Wally on February 9, 2007; parents Ferdinand and Doris; and brother Eugene Hotz and his wife Merle.   Dorothy’s memory will be cherished forever by her daughters Janice (Steve) Nelson of Battle Lake, Diane (Jennifer) Bergman of Minneapolis, Joan (Bryan) Oothoudt of Wadena, and Deetsy (Steve) Grubb of Cary, NC;  as well as seven grandchildren and thirteen great-grandchildren   Honorary pallbearers will be Dorothy’s grandchildren Mac (Nette) Nelson, Tyler (Catherine) Nelson, Matt (Laura) Oothoudt, Aaron Ellis, Callie (Lucas) Doty, Kate (Brian) Bjerke, Missy (Chris) Lund, and her 13 great-grandchildren.   The  burial will be in Calvary Cemetery in Wadena at a later date.   Memorials may be directed to St. Jude’s Children’s  Research Hospital (www.stjude.org/give.html)

The Memorial Mass for Dorothy Jane Bergman, a life-long resident of Wadena, will be held at 12:00 Noon on Saturday, December 29, 2018, at St. Ann&#8217;s Catholic Church in Wadena with Fr. Aaron Kuhn presiding.  Friends and family will gather... View Obituary & Service Information

The family of Dorothy Bergman created this Life Tributes page to make it easy to share your memories.

The Memorial Mass for Dorothy Jane Bergman, a life-long resident...

Send flowers to the Bergman family.