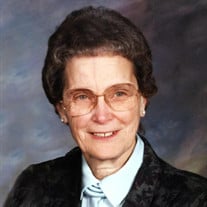 The private funeral service for Dorothy Nordstrom of Parkers Prairie and formerly of Eagle Bend will be held with Pastor Kali Christensen presiding. Dorothy, age 89, passed away with family by her side, on Wednesday, August 5, 2020 at the St. Williams Living Center, Parkers Prairie, MN. Dorothy was born to Leon and Gladys (Nelson) Hammond on November 25, 1930 in Eagle Bend, MN. She was married to Dale W. LeCount on September 3, 1949 until his death in 1953.   She later married Clinton Perry Nordstrom on August 6, 1955 in Clarissa, and they were together 48 years until his death in 2004.   Dorothy dedicated her life to caring for family members in times of need. Special joy was found when she shared days with family whether it was camping and fishing with her grandkids and great-grandkids, or holidays and family celebrations.  As a member of the United Methodist Church, she taught Sunday School and participated with the UMC Women. She was also a Women’s Auxiliary member.   Preceding Dorothy in death were her parents Leon and Gladys; husbands Dale and Clint; brothers LeRoy, Gerald, Donald, Leon Jr, and Gordon Hammond; and sisters Lucille Hagedorn, Leilo Lorenz, Marlene Klimek and Shirley Hammond.   She will be missed by her loving children Beverly (Gary) Johnson of Eagle Bend, Judy LeCount of Victoria, Nancy Tuorila of Eagle Bend and Robert (Peggy) Nordstrom of Fergus Falls; 13 grandchildren and 21 great-grandchildren; along with a brother Darald (Carol) Hammond of Eagle Bend.   Honorary pallbearers will be Eli Nordstrom, Ryan Finkenbinder, Brian Anderson, Nikki Stewart, Patricia Puffe, Sara Johnson and Jessica Kloster.   Serving as pallbearers will be Dustin Johnson, Glendon Johnson, Michael Clementson, Mitchell Clementson, Benjamin Johnson and Christopher Johnson. Burial will be in Pleasant Mound Cemetery in Leslie Township, near Clotho, MN. The family requests memorials go to Hospice of Douglas County, 809 Elm Street, Suite 1200, Alexandria, MN. 56308.

The private funeral service for Dorothy Nordstrom of Parkers Prairie and formerly of Eagle Bend will be held with Pastor Kali Christensen presiding. Dorothy, age 89, passed away with family by her side, on Wednesday, August 5, 2020 at the... View Obituary & Service Information

The family of Dorothy Nordstrom created this Life Tributes page to make it easy to share your memories.

The private funeral service for Dorothy Nordstrom of Parkers...

Send flowers to the Nordstrom family.