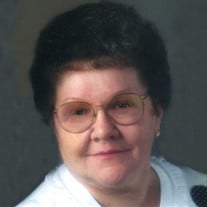 The celebration of life memorial mass for Dot Schertler, of Wadena, will be celebrated at 11:00 a.m. on Friday, October 18, at St. Ann’s Catholic Church in Wadena, with Father Aaron Kuhn as celebrant. Visitation will be held at the church on Friday, beginning at 9:30 a.m., with a Christian Mothers Rosary at 10:00, and visitation will continue until the time of the service Dot, age 81, passed away on Saturday, October 5 , 2019, at Fair Oaks Lodge in Wadena, MN. Dot Arlene Conn was born to Raymond and Laura (Fischer) Conn on April 29. 1938, in Thomastown Township, Wadena County, MN. Dot was united in marriage with Duane Schertler on July 17, 1962 at St. Ann’s Catholic Church in Wadena. They made their home in Wadena where Dot was a devoted stay-at-home mother, raising their five children. Her hands were always busy with the many tasks of the day. She also cared for other children and found time to tend to her flower gardens. Each year she held a rummage sale and enjoyed meeting the many friendly customers. Preceding Dot in death were her parents Ray and Laura; children Kelly Raymond Schertler (2013) and Kimberly Ann Schertler (2017); and Conn siblings Bently, Martha, Charles, Opal, Clarabelle and Florence. Dot is survived by her loving husband of 57 years, Duane; children Wayne (Kelly) Schertler of Savage, Patrick (Renee) Schertler of Nokesville, VA and Timothy Schertler of Toledo, OH; nine grandchildren, and five great-grandchildren; along with siblings Annabelle Olson and Goldie Brunko both of Wadena, Betty (Andy) Knight of Clovis NM, Peggy (Jim) Malone of Havre, MT, Nancy (Bill) Winkels of Minot, ND, Lola Rentz of Sebeka and Donald (Judy) Conn of New Prague. Burial will be in Calvary Cemetery, Wadena, MN. The family suggests memorials be directed to the Parkinson’s Foundation at www.parkinson.org.

The celebration of life memorial mass for Dot Schertler, of Wadena, will be celebrated at 11:00 a.m. on Friday, October 18, at St. Ann&#8217;s Catholic Church in Wadena, with Father Aaron Kuhn as celebrant. Visitation will be held at the church... View Obituary & Service Information

The family of Dot Schertler created this Life Tributes page to make it easy to share your memories.

The celebration of life memorial mass for Dot Schertler, of Wadena,...

Send flowers to the Schertler family.