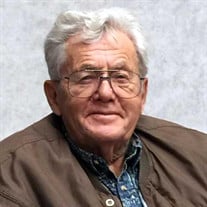 The funeral service for Doug Kapphahn of Bertha will be held at 11:00 a.m. on Friday July 17, at the New Life Church of God in Bertha, with Pastor Dave Seaton of the Faith United Church of Christ presiding. Visitation will be held at the church... View Obituary & Service Information

The family of Doug Kapphahn created this Life Tributes page to make it easy to share your memories.

The funeral service for Doug Kapphahn of Bertha will be held...