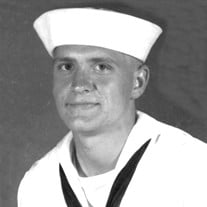 The memorial service for Douglas Robinson, Sr, of Wadena, will be held at 11:00 a.m. on Wednesday, March 21, at the Zion Free Lutheran Church in Wadena, with Pastor Curtis Emerson presiding. Visitation will be held at the church on Wednesday from 9:30 a.m. until the time of the service. With family at his side, Douglas, age 74, passed away on Thursday, March 15, 2018 at the hospital in St. Cloud, MN. Doug was born to Harold and Carrie (Arndt) Robinson on January 2, 1944, in Huron Beach, MI, where he graduated from high school. Doug was united in marriage to Grace Edith Pryor. He worked as a custodian at the National Guard Armory in Wadena, where he also enjoyed watching boxing matches. Doug used his spare time to enjoy the outdoors when camping and fishing. Doug was preceded in death by his wife Grace on November 10, 2012; daughters Dixie Robinson, and Diana Robinson; parents Carrie and Harold; brothers Frank and Lawrence Robinson; and sisters Nancy Millarz and Janet Mercr. He is survived by his son Douglas (Lucille) Robinson, Jr; daughters Dora Robinson and Denice (Glen) Watchorn; 13 grandchildren, 11 great-grandchildren, and 3 great-great-grandchildren. Military honors will be provided by the Elmer Goche Post 3922, Veterans of Foreign Wars, Wadena, MN.

The family of Douglas Robinson Sr. created this Life Tributes page to make it easy to share your memories.

The memorial service for Douglas Robinson, Sr, of Wadena, will...

Send flowers to the Robinson family.