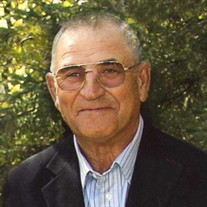 A Celebration of Life memorial service for Duane Kneisl, of Battle Lake and formerly of Bertha, will be held at 11:00 a.m. on Monday, June 8, at the New Life Church of God in Bertha, with Pastor Mark Brown presiding. Due to Covid-19 restrictions there will be limited seating at the church. Visitation will be held at the church on Sunday from 4:00 until 7:00 p.m. and will resume on Monday from 9:30 a.m. until the time of the service. On June 1, 2020, Duane, age 82, passed away peacefully with family by his side at Essentia Hospital in Fargo, ND. Duane was born to August and Gertrude (Schlagel) Kneisl on November 10, 1937, in Ottertail County, MN. When he was a toddler, his parents moved to a farm outside of Verndale where he attended country school, located across from his home. He then attended the Hewitt School until he was a sophomore and graduated from Verndale High School. In June of 1956, he married Shirley May Smith, and they lived down the road from his parents. They moved to California for six months where Duane worked at a factory. Missing Minnesota, they returned to the Verndale area. The following year, they moved to Aurora where Duane worked in the iron mines. By 1960, they bought their farm west of Bertha where Duane farmed with his family for 55 years. He enjoyed combining in the fall and was able to help his sons right up through the fall of 2019. In the mid 1970s Duane and his best friend Orrin started D & O Concrete which operated until the early 1980’s. Duane and Shirley decided to sell the farm and move to the lake near Vining in 2016, and later moved to Battle Lake. Duane was active in the Bertha Community, serving on the School Board, Lions Club, and 35 years on the Bank Board. His hobbies included hunting, fishing, golfing and hosting many card parties. Foremost was watching his grandchildren grow. He loved spending time attending their school events. He had the joy of seeing his great-grandchildren enter the world and was proud that he could name all 30 of them in order! He was a wonderful man who will be missed by many. Duane is survived by his wife Shirley of Battle Lake; children Mike (Arnette) Kneisl of Bertha, Brad (Brenda) Kneisl of Henning, Kathy (Steve) Kuhnke and Steve (Janet ) Kneisl both of Bertha; 12 grandchildren and 30 great-grandchildren; along with siblings Arnold (Darlene) Kneisl of Wadena and Jerome (Lois) Kneisl of Staples. Duane was preceded in death by his parents August and Gertrude; grandson Aaron Kneisl and half-brother Donald Bush. Honorary urnbearers will be Duane’s grandchildren. Burial will be in St. Joseph’s Catholic Cemetery, Bertha, MN.

A Celebration of Life memorial service for Duane Kneisl, of Battle Lake and formerly of Bertha, will be held at 11:00 a.m. on Monday, June 8, at the New Life Church of God in Bertha, with Pastor Mark Brown presiding. Due to Covid-19 restrictions... View Obituary & Service Information

The family of Duane Kneisl created this Life Tributes page to make it easy to share your memories.

A Celebration of Life memorial service for Duane Kneisl, of Battle...

Send flowers to the Kneisl family.