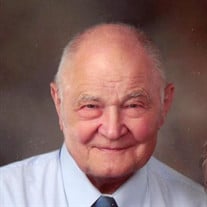 The memorial Mass for Duane Schertler of Wadena will be celebrated at 11:00 a.m. on Thursday, September 3, 2020 at St. Ann’s Catholic Church in Wadena, with Father Aaron Kuhn as celebrant. Visitation will be held at the church on Thursday from 9:30 a.m. until the time of mass.   Duane, age 85, passed away on August 19, 2020 at his son’s home in Savage, MN with family at his side.   Duane was born to Frank and Veronica (Uselman) Schertler on July 15, 1935 in Wadena, MN.  He attended school in Wadena and then enlisted in the Minnesota Army National Guard on August 29, 1957 where he attended Basic Training at Ft Chaffee, AR and served as a Senior Wheeled Vehicle Mechanic until his Honorable Discharge on August 28, 1964 at the rank of Specialist 5(E-5).   After first meeting Dot when she was in 3rd grade and starting to date her at 16 when her father allowed it, Duane was united in marriage with Dot  Arlene Conn on July 17, 1962 at St. Ann’s Catholic Church in Wadena and then putting down roots for 57 years of marriage.  Duane had a 45 year career as an automobile mechanic for Ken Stuntebeck Ford in Wadena having the opportunity to be known by so many in the community that remember him for fixing their cars.  He enjoyed the outdoors with a passion for gardening that provided food abundantly for his family.   Preceding Duane in death was his beloved wife, Dot (2019); children Kelly Raymond Schertler (2013) and Kimberly Ann Schertler (2017); parents, Frank and Veronica;  in-laws  Ray and Laura Conn and brother John Schertler.   Duane is survived by his children Wayne (Kelly) Schertler of Savage MN, Patrick (Renee) Schertler of Nokesville, VA and Timothy Schertler of Farmington Hills, MI, sister JoAnne (Tony) Kuefler of Brooklyn Park, MN; nine grandchildren, and five great-grandchildren; sister-in-law Barb Schertler of Wadena; along with numerous family members and friends.   Burial will be in Calvary Cemetery, Wadena, MN.   In lieu of flowers, the family asks that memorials be made in Duane’s memory and directed to a charity of your choosing.

The memorial Mass for Duane Schertler of Wadena will be celebrated at 11:00 a.m. on Thursday, September 3, 2020 at St. Ann&#8217;s Catholic Church in Wadena, with Father Aaron Kuhn as celebrant. Visitation will be held at the church on Thursday... View Obituary & Service Information

The family of Duane Schertler created this Life Tributes page to make it easy to share your memories.

The memorial Mass for Duane Schertler of Wadena will be celebrated...

Send flowers to the Schertler family.