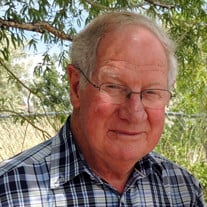 The funeral service for Dwight of M. Dobson, of Bluffton and formerly of Two Harbors, will be held at 11:00 a.m. on Wednesday, December 4, 2019 at the St. John Lutheran Church in Wadena with Pastor Stephen Meltzer presiding. Visitation will be held at the church on Wednesday from 9:30 a.m. until the time of the service. Dwight, age 84, passed away with family at his side on Tuesday, November 26, 2019 at North Memorial Hospital in Robbinsdale, MN. Dwight was born to Marvin and Grace (Kuper) Dobson on August 16, 1935 at their home in Meadow Township, MN. He attended country school near Nimrod, MN and graduated from high school in Sebeka, MN in 1953. He served his country in the U.S. Army from May 1955 until February 1957, spending 17 months in post war Korea. Dwight married Edith Sowers on June 21, 1958 in Sebeka, MN. He was employed with Reserve Mining Company in Silver Bay, MN for 30 years, where he held several different positions. For nine years following Reserve Mining, he worked for the state and county highway departments throughout Lake County. Dwight was an active member in the church his entire life, serving as financial secretary and trustee for Hope Lutheran Church in Two Harbors for many years. In 2012 he and Edith moved to Bluffton, MN to be closer to their siblings. He enjoyed fishing, gardening, being out in the woods (especially cutting wood), playing horseshoes and cards, and spending time with good friends, neighbors, and family. He especially enjoyed taking long distance road trips to visit his children and grandchildren. Memories of Dwight will be held dear by his loving wife Edith of Bluffton; children: Rick (Stacy Merrill) Dobson of Springfield, MO, Cindy (Scott) Williams of Corvallis, MT, Mike (Leigh) Dobson of Gilbert, AZ, and Kathy (Chris) Graff of Montrose, CO; 12 grandchildren and 3 great grandchildren with one on the way; brothers Dale (Janice) Dobson of Wadena, MN and Dean (Norma) Dobson of Milwaukee, WI; sisters Della Kowalski of Nashwauk, MN and Donna (Ron) Morafcik of Oak Creek, WI; and sister-in-law Joyce (Sam) Richards of Ishpeming, MI. Dwight was preceded in death by his parents Marvin and Grace; brother Duane; and brother-in-law Donny Kowalski. Honorary Pallbearers will be Ricky Dobson Jr., Josh Dobson, Kasi Moorhead, Kelsey Morozumi, Lindsey Williams, Maggie Seaton, Josiah Graff, and Joseph Graff. Active pallbearers will be Scott Williams, Tanner Dobson, Chris Graff, Evan Graff, Sean Graff, and Jonas Graff. Burial will be in West Lyons Cemetery, Lyons Township, MN.

The funeral service for Dwight of M. Dobson, of Bluffton and formerly of Two Harbors, will be held at 11:00 a.m. on Wednesday, December 4, 2019 at the St. John Lutheran Church in Wadena with Pastor Stephen Meltzer presiding. Visitation will... View Obituary & Service Information

The family of Dwight Dobson created this Life Tributes page to make it easy to share your memories.

The funeral service for Dwight of M. Dobson, of Bluffton and...

Send flowers to the Dobson family.