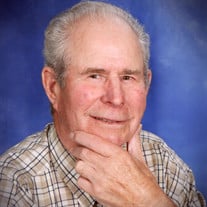 The funeral service for Dwight Eugene Ward of Bertha will be held at 11:00 a.m. on Thursday, February 21, 2019 at the New Life Church of God in Bertha with Pastor Jason Knoll presiding. Friends may call at the church on Thursday from 9:30 a.m. until the time of the service. Dwight passed away at the Central Todd County Care Center in Clarissa at the age of 91 years on Sunday, February 17, 2019 under the gentle care of the care center staff and Lakewood Hospice. Dwight Eugene was born to Worthy “Dee” and Florence (Larson) Ward on November 10, 1927, in rural Clarissa, MN. He grew up in the Clarissa and Bertha areas, where he attended school.  Dwight was united in marriage with Mary Whetham on October 16, 1948, in the United Methodist Church in Clarissa. They had a dairy farm east of Bertha for several years. After they sold the dairy cattle Dwight decided he would like to raise beef cattle, which he thoroughly enjoyed. Around ten years later, he sold the farm and retired in Bertha. Fifty years on the same farm was long enough. He also enjoyed his dogs and fishing when he wasn’t busy on the farm. He served on the school board and church board, and participated in the activities at the Bertha Senior Center. Dwight liked chatting with his neighbors and friends over a cup of coffee at the local café, and had a knack for adding humor to the conversation! He was a proud grandfather and his family had a special place in his heart. Dwight was preceded in death by his wife, Mary; parents, Dee and Florence; sisters, Vera (Glenn) Kassube and Irene (Paul) Sahli; brother, Chalmer (Betty) Ward: and brother-in-law Roger Harty. Memories of Dwight will be a comfort to his son, Gene (Karie) Ward; daughter, Connie (Gary) Dickinson; grandchildren, Ryan (Hallie) Ward, Shawn Ward, Justin (Kasha) Dickinson, Wade (Kari) Dickinson, and Kali (Nate) Pachan; great-grandchildren, Trever, Shea, Gracie, Tristan, Maddy, Mya, Jayven, Brodie, Bennett, Wesley, Belaney, Ryan, Caleb, Ethan, Tegan, Brayden and Aysen; sisters Shirley (Rich) Uselman and Vi Harty; along with many nieces, nephews, friends and neighbors. Honorary pallbearers will be Dwight’s great-grandchildren, church family and friends. His grandchildren will serve as active pallbearers. Burial will be in Zion Cemetery, Bertha, MN.

The funeral service for Dwight Eugene Ward of Bertha will be held at 11:00 a.m. on Thursday, February 21, 2019 at the New Life Church of God in Bertha with Pastor Jason Knoll presiding. Friends may call at the church on Thursday from 9:30 a.m.... View Obituary & Service Information

The family of Dwight Ward created this Life Tributes page to make it easy to share your memories.

The funeral service for Dwight Eugene Ward of Bertha will be...

Send flowers to the Ward family.