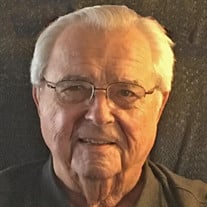 Earl Wesley Zniewski of St. Cloud, MN was called from this life on July 31, 2018, at St. Cloud Hospital surrounded by his family. He attained the age of 84 years, 8 months and 13 days. Funeral services will be Saturday, August 4, 2018 at 11:00 AM at St. John’s Episcopal Church, St. Cloud, MN. Visitation will be Friday, August 3, 2018 from 5:00 to 7:00 PM at Benson Funeral Home, St. Cloud, MN and one hour prior to the service at the church on Saturday. Burial will be in North Star Cemetery, St. Cloud, MN. Earl was born November 18, 1933, in St. Cloud, Minnesota, the son of Emil Carl and Ethel Mitilda (Stark) Zniewski. He was baptized December 3, 1933 at home and confirmed May 12, 1946 by Rev. Victor Geriki at Holy Cross Lutheran Church. He grew up in St. Cloud and attended Jefferson Junior High, Tech High School, Grinnell College, and the University of Minnesota. Earl served his country in the United States Army from October 20, 1954 to October 6, 1956 and was stationed in Germany. He was the last person in Benton County to be drafted into the Korean War. In 1960, Earl married Elizabeth Smith and during their marriage they were blessed with five children. Earl worked at Rex Granite for 54 years. He and his brothers, Neil and Carl, took over the business from their father, Emil. Through the years they saw many changes and innovations in the granite industry. Earl retired in 2008 at the age of 75. On July 20, 1990, Earl was united in marriage to Jane (Jan) DeBerry Lafferty at the old library at the College of St. Benedict in St Joseph, Minnesota. This union was blessed with more than 28 years of marriage. Earl was a member and trustee of Monument Builders of North America, member and president of American Monument Association, member and officer of the Exchange Club, and member and treasurer of St. John’s Episcopal Church. Among the many things he enjoyed were fishing, hunting, sports, travel, playing cards and cribbage, Sudoku, playing on his Iphone, volunteering at St. Cloud Hospital, and spending time with family and friends (especially the many summers at Leech Lake). He is survived by his wife, Jan; children: Greg (Julie Feddema) Zniewski of Benson, Mary (Jim) Brown of Astoria, SD, Kurt (Andrea Schoborg) Zniewski of Foley, Lynda Zniewski Ashcroft (Doug Kilanowski) of South Haven, and Joanne (Ramiz) Kolenovic of Montclair, NJ; step-children, Sean (Karen Bingea) Lafferty of Chanhassen and Meg (Joseph) Schuller of Wadena; 20 grandchildren: Susan, Amy, Zach, Heather, Grace, Eli, Jack, Allison, Emma, Deanna, Ryan, Alli, Connor, T.J., Randy, Bob, Mick, Steven, Derek, and Jessica; 5 great-grandchildren: Maddox, Hayden, Zoie, Mila, and Finley; and brother, Carl (Janet) Zniewski of St. Cloud; sister-in-law, Donna Zniewski of St. Cloud; and brother-in-law, Rod Sall of St. Paul. Earl was preceded in death by his parents, Emil and Ethel Zniewski; grandson, Seth Earl Zencius; siblings: Joyce Thiss, Neil Zniewski, Karen Sall; and step-son, Patrick (Sandy Vawters) Lafferty. The Benson Funeral Home in St. Cloud is in charge of arrangements. All of us here at Schuller Family Funeral Homes & Cremation Services express our sincere condolences to Jan and the entire Zniewski Family.

The family of Earl Zniewski created this Life Tributes page to make it easy to share your memories.

Earl Wesley Zniewski of St. Cloud, MN was called from this life...

Send flowers to the Zniewski family.