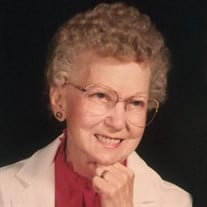 The Mass of Christian burial for Edna Perius of Wadena and formerly of Verndale, will be celebrated at 11:00 a.m. on Thursday at St. Frederick’s Catholic Church in Verndale with Father Lauren Germann as celebrant. Visitation with family and friends will be held at the Schuller Family Funeral Homes’ Verndale Chapel on Wednesday from 5:00 until 7:00 p.m. with Prayers at 5:30 and Rosary at 6:30 p.m. Visitation will resume at the church on Thursday from 9:30 a.m. until the time of the Mass. Edna, age 97, passed away on November 5, 2020, at the Fair Oaks Lodge in Wadena, under the gentle care of Knute Nelson Hospice. Edna was born to Ferdinand and Anna (Hamann) Stamm on September 10, 1923, in Loma, ND, where she graduated from high school. On June 21, 1944, Edna was united in marriage with Frank Perius in Loma, ND. Over the years they lived in Loma, Milwaukee, WI, Verndale and Wadena, MN. Community members will remember Edna for her 26 years in the Verndale School food service department. Her children’s friends and relatives came just to eat homemade buns by the best cook ever! Edna’s green thumb shined brightly in her beautiful African violets and flower gardens. Her faith was integral in her life and she enjoyed the Catholic Channel, recited many rosaries daily, and was a member of St. Frederick’s Christian Mothers. Edna was also a member of the Wadena VFW Auxiliary and a Food Shelf volunteer. Preceding Edna in death were her husband Frank on April 1, 1987; parents Ferdinand and Anna; brothers Henry, Joseph and Ferdinand Stamm, Jr; sisters Genevieve Ballweg, Edith Rhea and Louise Kram; and grandson Jamie Perius. Edna is survived by her children Jay (Jackie) Perius of Verndale, Kevin (Vonnie) Perius of Wadena and Terrry (Jean) Perius of Verndale; 12 grandchildren, 15 great-grandchildren; along with a host of friends. Honorary pallbearers will be Stephanie Selander, Jennifer Carlson, Leane Flynn, Melissa Yungbauer and Jamie Perius †. Active pallbearers will be Wayne Perius, Chris Perius, Lance Perius, Jacob Perius, Jayson Perius and Dustin Perius. Burial will be in St. Frederick’s Catholic Cemetery, Verndale, MN.

The Mass of Christian burial for Edna Perius of Wadena and formerly of Verndale, will be celebrated at 11:00 a.m. on Thursday at St. Frederick&#8217;s Catholic Church in Verndale with Father Lauren Germann as celebrant. Visitation with family... View Obituary & Service Information

The family of Edna Perius created this Life Tributes page to make it easy to share your memories.

The Mass of Christian burial for Edna Perius of Wadena and formerly...

Send flowers to the Perius family.