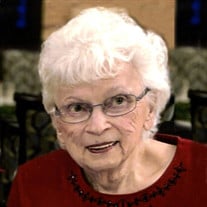 The funeral service for Elaine Carlson of Eagle Bend, will be held at 11:00 a.m. on Friday, September 24, at the Faith Lutheran Church in Eagle Bend with Pastor Allen Mortenson presiding. Visitation will be held at the church on Thursday, September 23, from 6:00 until 8:00 p.m., and will resume at the church on Friday from 9:30 a.m. until the time of the service. Elaine, age 88, passed away on September 14, 2021, at the Central Todd County Care Center in Clarissa. Elaine Agnes Sophia (Nordlund) Carlson was born on August 14, 1933, to Ernest & Emma (Disrud) Nordlund in Fosston, MN. She was named after her grandmothers Agnes & Sophia. Elaine lived in Fosston until she was 8 years old when her family moved to Trail, where her father, Ernest became the creamery manager. Elaine was baptized at the Oak Park Lutheran Church in October 1933 and was confirmed at the Sand Valley Lutheran Church in 1947. The family then moved in 1948 to Eagle Bend where her father bought a gasoline station. Elaine graduated in 1951 from the Eagle Bend High School. She met and dated this young farmer from church who was the “love of her life”. In 1952 she attended the Lutheran Bible Institute in Minneapolis. On March 21, 1953, she married Kenneth Carlson at the Petri Lutheran Church. They had an 8 o’clock p.m. candlelight wedding. They had been married for 59 good years when Ken passed away on May 29, 2012. Elaine had various bookkeeping jobs and the last one was with the local veterinarian but had to retire early because of medical problems. She served on the Petri Lutheran Church board, taught Sunday school, Bible school, Luther League Counselor, sang in the choir, was treasurer of church and Ladies Aid, Alter Guild, quilting groups and served on the church Education committee. She was well known for sewing many beautiful quilts in Eagle Bend and Alexandria. Elaine had the honor of being “Grand Marshall” in the 2010 Eagle Bend Days parade and was the Chairman of the 2000 and Co-chairman of the 2010 All School Reunions. Elaine worked on genealogy for both her side and Ken’s side of the family and compiled an Eagle Bend school history book in 2000 and in 2010. Elaine moved to Alexandria in 2012 after Ken passed away until July 23, 2021 and then moved to Central Todd County Care Center in Clarissa with Lakewood Health System Hospice Services in the last months of her life. Those who preceded her in death: husband, Kenneth; her parents, Ernest & Emma Nordlund; brothers, Howard (died at birth), Donald & Robert Nordlund; sister, Marlys (3 days old); nieces, Vicki Bolander & Christina McCulley; great nieces, Amanda Bolander & Marissa Wirth; nephews, Michael Nordlund & Jeffery Nordlund. She is survived by her children, Kyle Carlson of Eagle Bend, Janet (Paul) Asfeld of Clarissa & Kerwin Carlson of Montrose; granddaughters, Amanda (Craig) Kobliska of Mason City, IA & Breanna Asfeld of Fargo, ND; great grandson, Bentley Kobliska; sister, Gloria (Leonard) Thompson of Kingman, AZ; sisters-in-law Susan Nordlund of Wadena, Verna Carlson of Woodbury, and Mary Nordlund; as well as a host of nieces and nephews. God called her home on September 14, 2021 Burial will be at the Hope Lutheran Cemetery of Eagle Bend, MN. In lieu of flowers, family recommends donations be givin in Elaine’s name to Lakewood Health System Hospice, 401 Prairie Avenue NE, Staples, MN 56479. www.lakewoodhealthsystem.com

The funeral service for Elaine Carlson of Eagle Bend, will be held at 11:00 a.m. on Friday, September 24, at the Faith Lutheran Church in Eagle Bend with Pastor Allen Mortenson presiding. Visitation will be held at the church on Thursday,... View Obituary & Service Information

The family of Elaine Carlson created this Life Tributes page to make it easy to share your memories.

The funeral service for Elaine Carlson of Eagle Bend, will be...

Send flowers to the Carlson family.