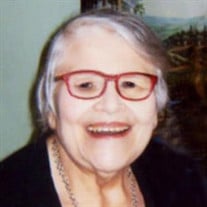 The Mass of Christian burial for Elaine Elsie Veit of Menahga, will be celebrated at 11:00 a.m. on Thursday, December 3, 2020 at the Our Lady of Assumption Catholic Church in Menahga with Father Lauren Germann as celebrant. Visitation for family and friends will be held at the church on Thursday, December 3, from 9:30 a.m. until the time of Mass. Elaine passed away at the age of 80 years old and was welcomed into her heavenly home on November 29, 2020. Elaine Elsie Veit was born on March 15, 1940 to John W. and Elsie (Wotschke) Veit in Redwood Falls, MN. Elaine lived in many towns including Seaforth, Milroy, Sebeka, Brainerd, and Menahga. Elaine graduated from the Brainerd High School in 1957 with having the honor of being the Valedictorian of her class. After her graduation, she furthered her knowledge and attended the University of Minnesota with a bachelor’s degree in teaching in 1961. Being an English teacher brought great joy to Elaine as she always encouraged her students to try their best and to find a career that would be like not having to go to work but rather a hobby. During her teaching years between Lake Benton, Bertha-Hewitt and Sebeka she directed many class plays, coached the speech teams, wrote many poems and short stories. Retiring from teaching in 1991 after more than 30 years did not stop Elaine from teaching as she loved to learn and share her wisdom with others. Loving to travel and to learn all she could about anything and everything was Elaine. She had a very sharp mind and it was evidenced by her creative/descriptive writing and speaking to others about what she found and learned to be of interest to her. In addition, Elaine made sure to include all her newfound knowledge by making many scrapbooks of her favorite things. She included pictures from all over the world to ones of family and friends. She enjoyed watching movies and TV, especially the Kitten Bowl. Successively, for many years, Elaine took care of her mother, Elsie, in their home in Menahga after her father passed away until Elsie needed more care. One of the biggest and most enjoyable things that brought Elaine the greatest comfort was the love of cats. Since she was a little girl on the farm and had a pet cat, Kittykins, she was completely in love and could not imagine her life without the love of her fur babies. Elaine had the best sense of humor and would often laugh at her cats doing funny things. She loved the Peanuts characters so much that she named her cats after them. Elaine will be missed by so many of her family, friends, neighbors, cousins, and anyone to whom had the privilege to know her, notably her goddaughter, Karen. She was preceded in death by her parents, sister Marian Deanna who died in infancy, her beloved cats Kittykins, Buddy, Charlie Brown, Lucy, Penny and Sweetness. Burial will be held at the Oak Grove Cemetery, near Brainerd, MN.

The Mass of Christian burial for Elaine Elsie Veit of Menahga, will be celebrated at 11:00 a.m. on Thursday, December 3, 2020 at the Our Lady of Assumption Catholic Church in Menahga with Father Lauren Germann as celebrant. Visitation for... View Obituary & Service Information

The family of Elaine Veit created this Life Tributes page to make it easy to share your memories.

The Mass of Christian burial for Elaine Elsie Veit of Menahga,...

Send flowers to the Veit family.