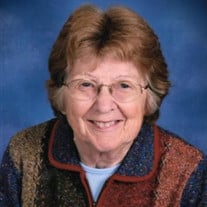 The private graveside service for Eleanora Halliwill of Wadena, was held at the Wadena Cemetery with Pastor Jim Stoneman presiding. A memorial service will be held at a later date. Eleanora “Ele”, age 89 passed away with family at her side on Thursday, March 19, 2020, at The Meadows Assisted Living in Wadena, MN under the tender care of Knute Nelson hospice. Eleanora was born to Martin and Minnie (Schaning) Becker on October 18, 1930 in Wadena, MN. Her mother Minnie passed away in 1936. Her father, Martin married Alice Gleason in 1939 and moved the family to Ann Arbor, MI. In 1945 they moved to Minneapolis, MN where she graduated from Washburn High School in 1948. After graduation she worked at the Fire Underwriters Inspection Bureau in Minneapolis. Eleanora was united in marriage to Robert Halliwill on April 20, 1951 in Robbinsdale, MN. They made their home in Bluffton and Wadena where they raised their two daughters. In 1992 they moved to their lake home on Rush Lake where she lived until 2015 when she moved back into Wadena. She was employed as a bookkeeper at J.C. Penney, S&L Company and The Gores Company over the years. Eleanora was a member of the 1st Congregational UCC, VFW Auxiliary, and Rush Lake Association where she served in various roles. She most enjoyed gardening, birds, travel, lake living, her grand dogs, and time with family. Eleanora was preceded in death by her husband Robert in 2003; daughter Sharon Burshiem in 2017; parents Martin and Minnie; step-mother Alice; and nephew Jeffrey Hammill. Eleanora will remain in the heart of her daughter, Susan (Scott) McDonald of Brooklyn Park, MN; sister Betty (Orville) Johnson of New Hope, MN; grandchildren Joseph McDonald, Alex McDonald, Chris McDonald and Lucas Bursheim; son-in law Steve Burshiem. Honorary pallbearers were her grandchildren. Memorials may be directed to Relay For Life, Susan G. Koman (www.the3day.org) or First Congregational UCC, Wadena, MN.

The private graveside service for Eleanora Halliwill of Wadena, was held at the Wadena Cemetery with Pastor Jim Stoneman presiding. A memorial service will be held at a later date. Eleanora &#8220;Ele&#8221;, age 89 passed away with family... View Obituary & Service Information

The family of Eleanora "Ele" Halliwill created this Life Tributes page to make it easy to share your memories.

The private graveside service for Eleanora Halliwill of Wadena,...

Send flowers to the Halliwill family.