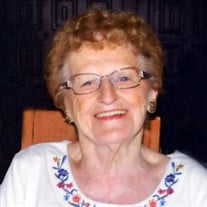 The Mass of Christian for Elizabeth Uselman, of Clitherall and formerly of Wadena, will be celebrated at 11:00 a.m. on Monday, May 6, at St. Ann’s Catholic Church in Wadena, with Father Aaron Kuhn as celebrant. Visitation will be held at the church on Monday from 9:30 a.m. until the time of the service, with a Rosary to begin at 9:30 a.m. With family at her side, Elizabeth, age 92, passed away peacefully on Sunday, April 28, 2019, at her home in Clitherall, MN, supported and comforted by the LB Homes Hospice staff. Elizabeth was born to Richard and Laura (Gilligan) Violett on December 23, 1926, in St. Paul, MN. Elizabeth was united in marriage with Raymond Edward Uselman on March 9, 1943 in St. Ann’s Catholic Church in Wadena. After Ray died she married Joseph Wirkus of Clitherall. Over the years she was employed at Red Owl and National Tea grocery stores, and served patrons at the Uptown Café. Elizabeth and Joe enjoyed camping and traveling the US and into Mexico. She was a member of the VFW Ladies Auxiliary in Wadena. Elizabeth found the most joy in spending time with Joe, and her family. Elizabeth was preceded in death by her husband, Raymond, on June 1, 1998; daughter, Margorie Ann in 1948; and parents, Richard and Laura. Elizabeth will forever be loved by her husband, Joseph; children, Raymond (Glenda) Uselman of Wadena, Richard (Shirley) Uselman of Hewitt, and Tom (Cindy) Uselman of Annandale; grandchildren, Teri, Robin, Jeff, Tyler, Jacki, Kari, Katie, Kevin, Erik, Megan, Tanner and Gretta; 21 great-grandchildren and 2 great-great-grandchildren; along with siblings George Violett, Myrtle Roberts and Mary Guy. Honorary pallbearers will be Elizabeth’s grandchildren. Active pallbearers will be Tanner Uselman, Kevin Uselman, Meagan Uselman, Erik Uselman, Katie Schmidt and Jacki Anderson. Burial will be in Calvary Cemetery, Wadena, MN.

The Mass of Christian for Elizabeth Uselman, of Clitherall and formerly of Wadena, will be celebrated at 11:00 a.m. on Monday, May 6, at St. Ann&#8217;s Catholic Church in Wadena, with Father Aaron Kuhn as celebrant. Visitation will be held... View Obituary & Service Information

The family of Elizabeth Uselman created this Life Tributes page to make it easy to share your memories.

The Mass of Christian for Elizabeth Uselman, of Clitherall and...

Send flowers to the Uselman family.