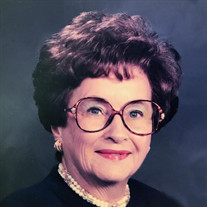 The public funeral service for Erma Quincer of Stillwater, and formerly of Wadena, will be held at 2:00p.m. on Saturday, March 6, at Immanuel Lutheran Church in Wadena, with Pastor Nate Loer presiding. A public visitation will be held at the church on Saturday from 12:30 p.m. until the time of the service. Erma, age 88, passed away with family at her side on March 1, 2021, at Gables of Boutwells Landing Care Center in Stillwater, MN. Erma Yvonne Ellingson was born, the youngest of three children, to Christ and Anna (Bese) Ellingson (of Adams, ND) on October 31, 1932, in rural Hewitt, MN. She was confirmed at Mountain Lutheran Church in Adams, and attended Adams Public School through her sophomore year. The family moved to Fargo, ND in the summer of 1948. Erma attended Fargo High School and graduated in 1950. Erma enrolled in Moorhead State Teachers College (MSU Moorhead) where she was a member of Gamma Nu Sorority. She graduated in 1952 with an Associate in Education degree. She was on the faculty at Wadena Elementary through 1954. She married Donald Charles Quincer of Wadena on December 18, 1954, at Immanuel Lutheran Church. They had four daughters, Kathryn, Peggy, Cynthia and Sara Jo. By 1970, Erma returned to Moorhead State and attained her Bachelor of Education degree in 1972, and taught Kindergarten and 5th grade, ending her teaching career with 1st graders before retiring in 1994. Erma and Don moved to Botwells Landing in Stillwater in 2013. Pride in her Norwegian heritage made Christmastime busy in the Quincer household with Erma guiding her family in making krumkake, rosettes and lefse. Erma was also a skilled quilter and busy knitter. She was a member of the Twentieth Century Club and Bridge Club. As a member of Immanuel Lutheran Church she taught Sunday School and participated in the women’s circles. Two of Erma’s favorite pastimes were traveling with Don and historical reading. Preceding Erma in death were her parents; brother Maurice and sister Delores Huebner. Memories of Erma will be treasured by her husband, Don of Stillwater; daughters, Kathy (Jay) Johns, Peggy (Dave) Rollins, Cindy Quincer and Sara Jo (David) Christianson, along with 10 grandchildren. Burial will be in Wadena Cemetery, Wadena, MN. Memorials may be directed to Immanuel Lutheran Church (403 2nd St SE, Wadena, MN) and Mayo Clinic, Dept. of Development (200 1st St. SW, Rochester, MN 95905. Memo line: Erma Quincer Memorial)

The public funeral service for Erma Quincer of Stillwater, and formerly of Wadena, will be held at 2:00p.m. on Saturday, March 6, at Immanuel Lutheran Church in Wadena, with Pastor Nate Loer presiding. A public visitation will be held at the... View Obituary & Service Information

The family of Erma Quincer created this Life Tributes page to make it easy to share your memories.

The public funeral service for Erma Quincer of Stillwater, and...

Send flowers to the Quincer family.