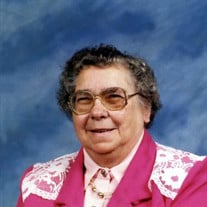 The funeral service for Erna Rausch, formerly of Bertha, will be held at 3:00 p.m. on Saturday, June 3, at St. Paul’s Lutheran Church in Bertha with Pastor Blake Rickbeil presiding. Visitation will be held at the church on Friday from 5:00 until 8:00 p.m. and will resume at the church on Saturday from 2:00 p.m. until the time of service. Erna passed away on Tuesday, May 30, 2017, at the Central Todd County Care Center, Clarissa, MN. She was 86 years old. Erna was born to Herman and Mary (Bristlin) Haase on November 7, 1930 in Bertha Township, MN. After graduation from Bertha High School, she attended college to become a teacher. Erna was united in marriage with John William Rausch on July 1, 1952, at St. Paul’s Lutheran Church in Bertha. John and Erna lived on a farm outside of Eagle Bend until John passed away January 5, 1987, then Erna moved to Bertha. She was an active member of St. Paul’s Lutheran Church where she served anywhere God needed her. She became a Foster Grandparent at the Bertha Elementary School for almost 20 years. Working with children was her calling. Erna loved gardening, playing cards, working crossword puzzles, quilting at the church, refunding, and baking (especially at Christmas). Erna valued her time with her children, grandchildren and great-grandchildren, and her many friends. Erna was preceded in death by her husband John; parents Herman and Mary; son David Rausch in 2011; and brothers Laverne, Alvin, LeRoy, Harlan, and infant twins. She is survived by her son James (Rita) Rausch of Deer Park, WA; daughter Donna (Tim) Andreason of New Blaine, AR; daughter-in-law Michele Rausch of Eagle Bend; ten grandchildren and five great-grandchildren; brothers Delbert (Caroline) Haase of Brooklyn Park; along with sister MaryAnn (James) Studanski of AZ; nieces and nephews; and many other relatives and friends. Honorary pallbearers will be Erna’s great-grandchildren. Grandchildren will serve as pallbearers. Interment will be in Woodside Cemetery, Wrightstown, MN.

The funeral service for Erna Rausch, formerly of Bertha, will be held at 3:00 p.m. on Saturday, June 3, at St. Paul&#8217;s Lutheran Church in Bertha with Pastor Blake Rickbeil presiding. Visitation will be held at the church on Friday from... View Obituary & Service Information

The family of Erna Rausch created this Life Tributes page to make it easy to share your memories.

The funeral service for Erna Rausch, formerly of Bertha, will...

Send flowers to the Rausch family.