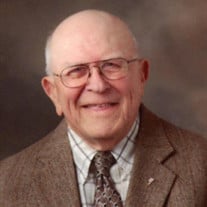 The Mass of Christian Burial for Ervin H. Weber of Wadena, will be celebrated at 11:00 a.m. on Friday, November 2, at the St. Ann’s Catholic Church in Wadena, MN, with Father Aaron Kuhn as celebrant. The visitation will be held on Thursday at St. Ann’s Parish Hall from 4:00 until 8:00 p.m., with a Knights of Columbus Rosary at 6:30 and Parish Prayers at 7:30. The visitation will resume at the church on Friday from 9:30 a.m. until the time of the Mass. Ervin, better known as Erv, passed away on Friday, October 26, 2018, at the age of 89 years, at his home in Wadena, under the compassionate care of his family and Knute Nelson Homecare & Hospice. Erv was born to Herman and Anna (Klimek) Weber on August 9, 1929 in Parkers Prairie, MN. He attended Parkers Prairie Public Schools, joined the US Army in September of 1952 during the Korean Conflict, and served until his honorable discharge on May 27, 1954. Erv was united in marriage with Jane Lois Richter on May 9, 1955, at St. Ann’s Catholic Church, Wadena. They made their home and raised their family in Wadena, where he worked over 30 years for the City of Wadena Utilities Plant as the Water Foreman. Following retirement, he spent much of his time fishing and enjoying the outdoors. Preceding Erv in death were parents Herman and Anna; an infant son; brother Darrel Weber and an infant brother. He is survived by his wife, Jane; children Thomas (Mary Dee) Weber of Wadena, Timothy Weber of Wadena, Patrick (Vanessa) Weber of Round Rock, TX, and Angela (Jerald) Dworshak of Moorhead; six grandchildren and six great-grandchildren; along with numerous in-laws, nieces, nephews and friends. Pallbearers will be Michael Weber, Dale Weber, Gary Peters, Gordy Moench, Joe Peluso, and Robert Roggenkamp. Honorary pallbearers will be all of Erv’s grandchildren and great-grandchildren. Burial will be in Calvary Cemetery, Wadena, MN.

The Mass of Christian Burial for Ervin H. Weber of Wadena, will be celebrated at 11:00 a.m. on Friday, November 2, at the St. Ann&#8217;s Catholic Church in Wadena, MN, with Father Aaron Kuhn as celebrant. The visitation will be held on Thursday... View Obituary & Service Information

The family of Ervin Weber created this Life Tributes page to make it easy to share your memories.

The Mass of Christian Burial for Ervin H. Weber of Wadena, will...

Send flowers to the Weber family.