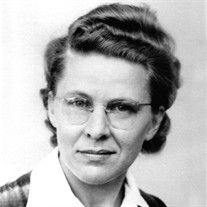 The funeral service for Esther Soderberg, a resident at the Care Center in Clarissa, will be held at 11:00 a.m. on Thursday, December 21, at St. Paul’s Lutheran Church in Bertha, with Pastor Blake Rickbiel presiding. Visitation will be held at the church on Thursday from 9:30 a.m. until the time of service. Esther, age 103, passed away on Thursday, December 14, 2017 at the Central Todd County Care Center in Clarissa, MN. Esther was born January 26, 1914, to Albertina (Tina) Johanna Klebs and Louis Kassulker. Esther was baptized on February 14, 1914 and confirmed March 2, 1929. Esther attended Bertha public schools all 12 grades. She graduated from Bertha High School in 1933. Then attended Wadena Teacher Training and got a teacher's certificate on May 16, 1934 and went to Bemidji State Teacher College during the summers between her school teaching during the year. Esther also gave piano lessons much of her life. She had a certificate from the Conservatory Piano Course in teaching proficiency June 19, 1929. (She was only 15 years old.) Miss Esther Kassulker teaching record. $ is per month. School district #105 Todd County 1936 wages $45 per month, 1937 $45, 1938 $60; #259 Ottertail County. 1939 $70, 1940 $70, 1941 $70; #64 Todd County 1942 $90; #113 Ottertail 1943 $125, 1944 $130; #179 Ottertail, 1945-$150, 1946 $170. 1947 $185, 1948 $110; #180 Ottertail, 1949 $225, 1950-51, $225. Esther was an only child, but her cousin Harold Klebs a few months older and they grew up together and had a solid relationship all their lives. When Harold and Vernon died the same year Harold's wife, Ruth, and Esther traveled all over the USA and Canada. She also had her cousin, Chloe Sarver Booen, that she spent much time with and her five double cousins. Esther dad Louis Kassulker married Tina Klebs and the double cousins’ dad, Henry Klebs (younger brother to Tina) married Clara Kassulker (younger sister of Louis). Those cousins are Earl Klebs, Edith Iverson, Alita Lownsbury, Kenneth Klebs and Kate Wodney. Other cousins include, Orville and Louis Klebs, Larry Johnson and Audry Schmidt and as mentioned above Harold & Chloe. At Bertha High School, Esther was active in Chorus, Glee club, Class officer (Treasure), Senior Class Play "Tiger House". She played the part of Mrs. Murdock. She was also in Home Economies' Club. Esther said there were no sports for girls in those days. In those days students were required to take 2 after school activities in order to graduate. Esther was a woman of great faith and very active much of her life at St. Paul's Lutheran Church, Bertha, MN . She was active in Ladies Aid, a church club called the "Sparks Plugs" taught Sunday School and release time classes, She was active in missions, quilt making, annual smorgasbord, and benefits for the Aid Association for Lutheran's, taught release time classes to a special needs child and helped him with his learning. She also taught Vacation Bible School. She was organist in the church she and her husband attended. Other activities were with the Bertha Historical Society, Women's club and Gardening Club and she helped write the Klebs history book. Esther married Vernon Soderberg on June 10, 1951 at St. Paul's Lutheran Church in Bertha, MN. They had a dairy farm near Wadena, MN. They raised crops to feed the animals and sell and Esther had a large garden. Mr. Soderberg passed away in 1982. After Vernon died, Esther moved to her parents’ home in Bertha; where she continued to have gardens, walked every where to church, the stores, to get the mail. Because she walked so fast people often said of her that she ran the town of Bertha from one end to the other. Vernon had siblings and hence Esther had sister & brother in laws and nieces and nephews of which she loved dearly. Esther moved to Pam's Place in Eagle Bend in June of 2010. Then in December of 2011 Esther had a stroke, ended in the hospital and went to live at Central Todd County Care Center in December of 2011. Esther's love of the Lord has endured through out her life. Those who have gone before her are her father, Louis Kassulker; mother, Albertina (Tena) Johanna Klebs; husband, Vernon Hugo Soderberg; grandmother, Johanna Wegner Klebs; grandfather, Julius Carl Klebs Sr; grandfather, Louis Kassulker Sr. and grandmother, Caroline Meinke. Those who survive are many cousins, nieces, nephews, sister in laws, neighbors, friends, students and many who have cared for her. Burial will be in St. Paul’s Lutheran Cemetery, Bertha, MN. The family would like to thank the staff at Central Todd Care Center for their kind, compassionate, and dedicated care of Esther. We would also like to thank St. Paul's Lutheran Church and all who have given wonderful care of Esther from the church and also the Bertha Historical Society and many neighbors, relatives and friends. Thank you to all of you who have sent cards, letters and came to visit Esther faithfully and helped in so many ways to make Esther's life so very much better. Memorials are requested to be given to; St. Paul's Lutheran Church, Bertha Historical Society and Central Todd County Care Center.

The funeral service for Esther Soderberg, a resident at the Care Center in Clarissa, will be held at 11:00 a.m. on Thursday, December 21, at St. Paul&#8217;s Lutheran Church in Bertha, with Pastor Blake Rickbiel presiding. Visitation will be... View Obituary & Service Information

The family of Esther Soderberg created this Life Tributes page to make it easy to share your memories.

The funeral service for Esther Soderberg, a resident at the Care...

Send flowers to the Soderberg family.