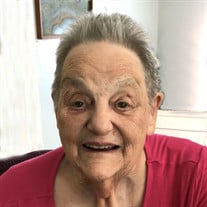 Ethel Luukkonen, age 83, of Sebeka, Minn., died peacefully in her sleep Monday, June 28, 2021, at home on the farm in Red Eye Township just the way she wanted with her son James as her caregiver. Ethel was born to Albert and Edith (Hotchkiss) Watrous on May 28, 1938, in Derby, Conn., and she grew up in Ansonia, Conn. She was the second of four daughters. As a child she enjoyed putting on plays in their “Backyard Theater” for family and neighbors. At 9, she started working as a babysitter. At 12, she began caring for newborn Beth “Buffy” Murphy who she considered her first baby. Ethel was involved in Daughters of the King through the Episcopal Church and the Rainbow Girls of Eastern Star. As a teenager, she worked as a soda jerk at the drugstore, and she graduated from Ansonia High School in 1955. At 17, she started working in the office of the AJ Hook Company in Ansonia, Conn., then for Southern New England Bell Telephone Company in New Haven, Conn. Ethel traveled to Europe with the telephone company’s social club, and it was through the club that she also attended a dance at the Nike Missile Army Base in West Haven, Conn. Soon after, her friend arranged a blind date for her. She didn’t know which man was her date until Army GI Vilho “Luke” Luukkonen from Sebeka, Minn., said, “Get in the backseat!” Ethel and Luke were married September 24, 1960, in Ansonia, Conn., and the city girl moved to the country, transferring to work in the telephone office in Wadena, Minn. They bought their first farm with “four rooms and a path.” They were blessed with three sons: Duane “Dob”, David  and James and a daughter Beth. In 1975 they moved to the Luukkonen homestead. She worked at the Sebeka Drug Store, Sebeka Municipal Liquor Store as the assistant manager and then the Sebeka American Legion Post 456 as the assistant gambling manager for 26 years. Ethel was active in her community: Red Eye Homemakers, Birthday Club, Our Saviour’s Lutheran Church Sunday School Superintendent, WELCA Treasurer, Red Eye Township Treasurer for 55 years, Wadena County Township Association Treasurer, Fire Warden for 45 years, Sebeka American Legion Auxiliary, 5-Wings Art Council, Sebeka Senior Citizen Center President, Senior Companion Driver, Red Hat Ladies, Sweet Adelines, B-Sharps Women’s Barbershop, Northern Lights Chorale and Monday night Pinochle. Ethel was “always on the go” attending local concerts, theater and was a member of the Wadena Concert Association. She enjoyed attending her granddaughter Hope’s many dance, theater and choral performances. Her hobbies included crocheting, reading, cooking with Luke, visiting, doing puzzles, playing cards — especially Pinochle — and board games. Ethel was devoted to her husband Luke for 59 years until his passing, Oct. 27, 2019. Luke referred to her as the “speaker of the house.” Her daughter Beth referred to her as “The Authority.” She was the loving, wise, grand matriarch. Ethel is survived by her sons Duane “Dob” (Susan Stoddard) and James Luukkonen both of Sebeka, Minn., and daughter Beth (Daniel A.) Kern of Wadena, Minn. Grandchildren include granddaughter Hope Dumpprope of Duluth, Minn., grandson Jake Luukkonen of Minneapolis, Minn., step-grandsons Craig Little of Hubertus, Wis., Michael Little of Berthold, N.D., Thomas Craig of Sebeka, Minn., and the grandchildren her son David helped to raise: Jason (Angie) Vargo of Sebeka, Minn., Samantha (Dyren) Parvi of Sebring, Fla., Justin (Erika) Vargo of Brainerd, Minn., and Randi Vargo of Rogers, Minn. Also, her sisters Helen Ranno of Naugatuck, Conn., Carolyn Reichardt of Seymour, Conn., brother-in-law Roy (JoAnn) Luukkonen of Brainerd, Minn., and sister-in-law Linda Wurm of Nevis, Minn., and numerous nieces and nephews. Ethel was preceded in death by her husband, Luke; parents, Albert and Edith Watrous of Ansonia, Conn.; her sister Marlene and brother-in-law Steve Wallick of Naugatuck, Conn.; brother-in-law Peter Ranno of Naugatuck, Conn.; brother-in-law Gary Wurm of Cedar, Minn.; daughter-in-law Susan Anderson Craig Luukkonen of Sebeka; and son David Luukkonen of Sebeka. Visitation will be held 4-7 p.m. with a prayer service at 5 p.m. on Friday, July 16, 2021, along with cards and board games to follow at Our Saviour’s Lutheran Church in Sebeka, Minn. A Celebration of Life Service will be held at 11 a.m. on Saturday, July 17, 2021, with Rev. Eric Clapp officiating. Visitation will be held one hour prior to the service. Interment Services will be held at Red Eye Cemetery, northwest of Sebeka, MN., immediately following the service, where Ethel decided to serve as the “greeter” at the entrance of the cemetery. The service will be videotaped and streamed live on Facebook — Our Saviour’s Lutheran Church, Sebeka.

Ethel Luukkonen, age 83, of Sebeka, Minn., died peacefully in her sleep Monday, June 28, 2021, at home on the farm in Red Eye Township just the way she wanted with her son James as her caregiver. Ethel was born to Albert and Edith (Hotchkiss)... View Obituary & Service Information

The family of Ethel Luukkonen created this Life Tributes page to make it easy to share your memories.

Send flowers to the Luukkonen family.