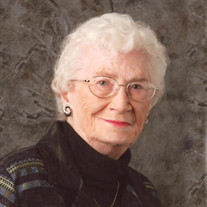 The Celebration of Life memorial service for Ethelyn Pearson, of Clarissa and formerly of Wadena, will be held at 11:00 a.m. on Saturday, June 19, at the Johnson-Schuller Chapel in Wadena. A gathering of family and friends will begin at 9:30... View Obituary & Service Information

The family of Ethelyn Pearson created this Life Tributes page to make it easy to share your memories.

The Celebration of Life memorial service for Ethelyn Pearson,...

Send flowers to the Pearson family.