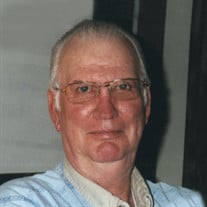 ** Please note a change of location for the visitation and service. The public memorial service for Eugene “Gene” Smith of Fargo, ND, will be held at 2:00 p.m. on Friday, December 18, 2020 in the Schuller Family Funeral Homes & Cremation Services' Verndale Chapel, in Verndale, MN, with Pastor Ken Uhren presiding. Go Rest High On The Mountain will be sung by Dan and Tammie Reger. A public visitation with family and friends will be held at the Verndale Chapel on Friday from 12:30 p.m. until the time of the service. Eugene “Gene” Smith, age 77, of Fargo, passed away on December 2, 2020 at his home with family at his side and under the gentle care of Red River Valley Hospice. Eugene “Gene” was born to Philomine (Strack) and Earl Smith on August 28, 1943, in Staples, MN. He attended schools in Staples, then went into the US Air Force for eight years. His very first job was on a dairy farm. He attended the Granite Falls’ Vocational Technical school for the Precision Machine program and worked for Ardell Products in the Twin City area. From there, Gene worked as a Switchman for Northern Pacific Railroad and later for Burlington Northern Sante Fe Railroad as a conductor, and attained 37 years of experience. In 1969, Gene was united in marriage with Darlene (Fellman) Goodpaster on his birthday, August 28. Away from work he filled his time with the outdoors as an avid hunter and fisherman. Gene and Darlene spent 16 winters in Corpus Christi, TX until Gene became too ill with COPD. Preceding Gene in death were his parents Philomine and Earl; brother Denny; sister Mikki; and brother-in-law Mathias Heltemes. Gene is survived by his wife of 51 years, Darlene of Fargo, ND; sons Scott (Shari) Iverson of Circle Pines, Michael (Dena) Iverson of Staples and Bryan Smith of Wahpeton , ND; grandchildren Jay, Meagan, Shane, Heather, Jake and Holly; six great-grandchildren; sisters Mary Heltemes of West Bend, WI, Joyce (Larry) Garland of Slayton, Karen (Harold) Duda of Keystone, SD, and Claudia Craft of Pillager; along with brothers George (Jan) Smith and Greg (Becky) Smith both of Staples. Honorary pallbearers will be Dan Reger, Rudy Fellman, Larry Sather, Clyde Mertens, Don Strack, John Hoemberg and Jack Trusdale. Military honors provided by the Elmer Goche Post 3922, Veterans of Foreign Wars, Wadena, MN. Burial will be in Philbrook Cemetery in Villard Township, Todd County, MN.

** Please note a change of location for the visitation and service. The public memorial service for Eugene &#8220;Gene&#8221; Smith of Fargo, ND, will be held at 2:00 p.m. on Friday, December 18, 2020 in the Schuller Family Funeral Homes &... View Obituary & Service Information

The family of Eugene "Gene" Smith created this Life Tributes page to make it easy to share your memories.

** Please note a change of location for the visitation and service.

Send flowers to the Smith family.