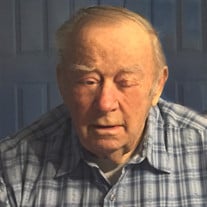 The funeral service for Eugene Roller Sr, of New York Mills, was held at 11:00 a.m. on Saturday, August 31, at the Southbrook Baptist Church in Wadena, with Pastor Wendell Wahlin presiding. Visitation was held on Friday from 5:00 until 8:00 p.m. at the Johnson-Schuller Chapel in Wadena, and resumed at the church on Saturday from 9:30 a.m. until the time of the service. Surrounded by his family, Eugene passed away at the age of 87, on Monday, August 26, 2019, at his home near New York Mills, MN. He was under the care of Hospice of the Red River Valley. Eugene was born to Albert and Leontina “Dena” (Hirsckorn) Roller on December 7, 1931, in Harvey, ND where he received his education. Eugene was united in marriage with Violet Schimelfenig on September 28, 1952, in Fessenden, ND. After several years of farming in North Dakota they moved to Hewitt, MN. Later, they sold the farm to their son, and with Gene’s love for farming, they moved to a farm near New York Mills. He had a passion for raising red and white Holsteins, and also operated Roller Dairy Supply. They had a winter home in Chadron, NE. Eugene was preceded in death by his parents, Albert and Dena; sister, Marlys Olson; and son-in-law Edward Heikkila. Surviving Eugene are his devoted wife Violet; children Gene (Brenda) Roller Jr of Hewitt, Ardis (Phil) McFarlane of Kansas City, MO, and Barbara Heikkila of Saginaw; 9 grandchildren and 15 great-grandchildren; brother Jerry (Audrey) Roller; along with a host of neighbors and friends. Pallbearers will be his grandsons, Brent Roller, Ryan Roller, John McFarlane, Seth Heikkila, Luke Heikkila, and Drew McFarlane. Burial was in Oak Valley Cemetery, rural Hewitt, MN.

The funeral service for Eugene Roller Sr, of New York Mills, was held at 11:00 a.m. on Saturday, August 31, at the Southbrook Baptist Church in Wadena, with Pastor Wendell Wahlin presiding. Visitation was held on Friday from 5:00 until 8:00... View Obituary & Service Information

The family of Eugene Roller Sr created this Life Tributes page to make it easy to share your memories.

Send flowers to the Roller family.