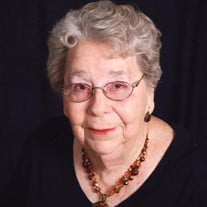 The funeral service for Eunice Dague, of Wadena and formerly of Verndale, will be held at 11:00 a.m. on Monday, November 11, at the Verndale Alliance Church, with Pastor Tony Stanley presiding. Visitation will be held at the Alliance Church on Sunday, November 10, from 5:00 until 8:00 p.m. and will resume at the church on Monday from 9:30 a.m. until the time of the service. Eunice, age 90, passed away with family at her side on Tuesday, November 5, 2019, at the Perham Living Center in Perham, MN. Eunice was born at home to Albert and Laura (Thorson) Erickson on June 16, 1929 in Wadena Township, Wadena County, MN. Eunice was united in marriage with Royston “Roy” Dague on March 10, 1946 in Oylen, MN. She worked various jobs until becoming a co-owner of J & R Mattress Factory in Bertha. She was an avid reader, especially of her Bible, and enjoyed cooking and golfing. Most of all, she treasured time spent with family and friends. Eunice was preceded in death by her husband Roy, on December 17, 2011; son Jeff; parents Albert and Laura; and brothers Gene and Ray. Surviving Eunice are her son Bernard (Dee) of Sun City, AZ; daughters Karen Young of New Hope, Deb (Dick) Finck of Bertha, Pam (Dave) Fuller of Verndale, and Laura (Lawrence) Brown of Washington; 18 grandchildren, 34 great-grandchildren and four great-great grandchildren; daughter-in-law Deb (Jeff) Dague of Litchfield; sister Ruth Christiansen of Wadena; along with a host of relatives and friends. Honorary pallbearers will be all of Eunice’s grandchildren. Pallbearers will be Keith Dague, Chris Dague, Dale Finck, Bobby Cox, Kevin Fuller, Ryan Winters and Elliott Sandberg. Burial will be next to her husband in Green Lawn Cemetery, Verndale, MN.

The family of Eunice Dague created this Life Tributes page to make it easy to share your memories.

The funeral service for Eunice Dague, of Wadena and formerly...

Send flowers to the Dague family.