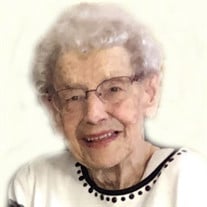 The funeral service for Eunice Johnson, a resident at the Henning Rehabilitation & Healthcare Center, and formerly of Wadena, will be held at 1:00 p.m. on Tuesday, January 29, at the First Congregational United Church of Christ in Wadena. Visitation will be held at the church on Tuesday from 11:30 a.m. until the time of the service. One week shy of her 95th birthday, Eunice passed away with family at her side on Friday, January 25, 2019, at the Henning Rehabilitation & Healthcare Center, Henning, MN, with the compassionate nurturance of Knute Nelson Hospice and Healthcare. Eunice was born to Earl Oliver and Ida Charlotte (Reber) Ceaser on February 1, 1924, at Odessa, MN. Her family moved to Wadena when she was a young child. She attended Wadena High School. Shortly after high school she was united in marriage with James Arthur Johnson in Wadena, MN. They started their family and raised four children. They lived in Duluth from 1970-1978. In 1978 they moved back to East Battle Lake, where she resided until she moved back to Henning in 2011. Eunice enjoyed reading, sewing, hunting, fishing, playing cards and had been a member of the Wadena VFW Auxiliary in years past. She loved spending time at the lake and hosting picnics. As the matriarch of the family, she took great pride and joy in spending time with her family and friends. She was fiercely strong and independent and wasn’t afraid to speak her mind. Eunice was preceded in death by her husband James on September 6, 1995, parents Earl and Ida, and brother Glen Ceaser. Memories of Eunice will remain in the hearts of her children Denise (Dave) Holmgren of Henning, Susan (Richard) Herzberg of Henning, Connie Jo (Larry) Lesnau of Menahga, Robert (Julene) Johnson of Cold Spring; 7 grandchildren, 10 great-grandchildren and 1 great-great-grandchild; sisters, Delores Paquette of Henning and Pam (Paul) Michalek of Alexandria, MN. Casket bearers will be her grandchildren Douglas Hirschey, Michael Hirschey, Bradley Herzberg, Shelly Paul, Deena Foote, Jasper Johnson, and Joshua Johnson. Burial will be in Wadena Cemetery, Wadena, MN.

The funeral service for Eunice Johnson, a resident at the Henning Rehabilitation & Healthcare Center, and formerly of Wadena, will be held at 1:00 p.m. on Tuesday, January 29, at the First Congregational United Church of Christ in Wadena.... View Obituary & Service Information

The family of Eunice Johnson created this Life Tributes page to make it easy to share your memories.

The funeral service for Eunice Johnson, a resident at the Henning...