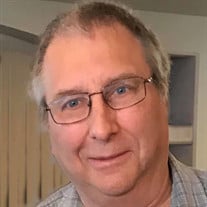 The memorial service celebrating the life of Everett Rolli of rural Staples will be held at 11:00 a.m. on Saturday, October 30, at the Family Life Church in Verndale with Pastor Amos Self presiding. A gathering of family and friends will be held at the church on Saturday from 9:30 a.m. until the time of the service. Everett, age 71, passed away in the early hours of October 19, 2021, at the Sanford Medical Center, Fargo, ND. Everett was born to Everett John Henry and Harriet Winifred (Vrieze) Rolli on February 15, 1950, in Spring Valley, Fillmore County, MN. He grew up in Preston and graduated from Central High School in Red Wing. He served in the Army Reserves until his honorable discharge. Everett was united in marriage with Janis Myrtle Peterson on May 18, 1974, at Cross of Christ Church in Welch, MN. They moved to Staples in 1979, where Everett farmed and drove school bus for 24 years. He was an active member in his church. His interests included watching westerns, bowling, card games, and word searches. He was a big kid at heart, who truly adored his children and grandchildren. They lovingly referred to him as PoPo and PaPa Rolli. Preceding Everett in death were his parents Everett and Harriet; sister Carol Pruter; son-in-law, Larry Collison; and in-laws Carl, and Myrtle Peterson. Surviving Everett are his devoted wife, Janis; children, Kimberly (Ben) Butler of Browerville, Karen (Randy Knowlen) Collison of Paynesville, Kristina (Landon) Brincefield of Hawley, Keith Rolli of Staples, Kevin (Jacey) Rolli of Linton, ND and Kurt Rolli of Staples; grandchildren, Austin (Anna) Butler, Dalton (fiancée Allie) Butler; Josh, Corbin, and Kaylee Collison, Mya, Madison, and Thea Brincefield, and Graisyn Rolli; siblings, Koni (Robert) Nelson of Fountain and Candace (Dan) Robinson of Red Wing; brother-in-law, Gene (Luena) Pruter; along with a host of extended family members and friends. Honorary urn bearers will be Everett’s grandchildren. A private burial will be held later in Moran Methodist Cemetery, Germania Township, Todd County, MN. Memorials may be directed to the National Kidney Foundation. (www.Kidney.org)

The memorial service celebrating the life of Everett Rolli of rural Staples will be held at 11:00 a.m. on Saturday, October 30, at the Family Life Church in Verndale with Pastor Amos Self presiding. A gathering of family and friends will be... View Obituary & Service Information

The family of Everett Rolli created this Life Tributes page to make it easy to share your memories.

The memorial service celebrating the life of Everett Rolli of...

Send flowers to the Rolli family.