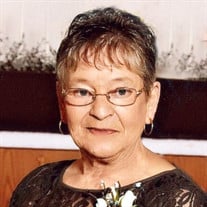 The Mass of Christian Burial for Florence Notch, of rural Verndale, will be celebrated at 2:00 p.m. on Friday, May 10, at the St. Frederick's Catholic Church in Verndale, with Father Lauren Germann as celebrant. Visitation will be held on Thursday... View Obituary & Service Information

The family of Florence Notch created this Life Tributes page to make it easy to share your memories.

The Mass of Christian Burial for Florence Notch, of rural Verndale,...

Send flowers to the Notch family.