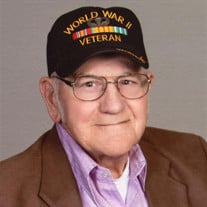 The Mass of Christian Burial for Florian Schmidt of rural Verndale will be celebrated at 11:00 a.m. on Saturday, December 30, 2017 at the St. Ann's Catholic Church in Wadena with Fr. Mitchell Bechtold as celebrant. Friends may call on Friday from 5:00 until 8:00 p.m. at the St. Joseph's Catholic Church in Bertha with Parish Prayers being held at 6:00 p.m. and Knights of Columbus Rosary service at 7:00 p.m. Visitation continues at St. Ann's Catholic Church in Wadena on Saturday from 9:30 a.m. until the time of Mass. Florian passed away at the age of 91 years, on Saturday, December 23, 2017, at Tri-County Healthcare in Wadena, MN, with family at his side. Florian was born to George C. and Barbara (Armbrust) Schmidt on February 3, 1926, in Fayette, Dunn County, ND. He served in the US Army during WWII from October 21, 1944 until his honorable discharge on November 25, 1946. He was united in marriage with Mildred Dukart on September 27, 1949 in Dickinson, ND. Florian worked as a mechanic in Dickinson until May 1962, when he and his wife moved their family of six children to a dairy farm near Verndale, MN. Eventually having three more children. For the next 30 years he raised his family of nine children. In 1988 he started Schmidt's Small Engine Repair which he owned and operated for 20 years. Florian loved to do wood working in his shop, to feed and water birds and, of course, shoot his pellet gun out the bedroom window at the pesky squirrels and unwanted birds! He loved when local people stopped by to pick rhubarb. In return they baked him rhubarb goodies. Florian was a hard-working man, and instilled that virtue into each and every one of his children. He also was an expert at giving life-long advice to his grandchildren. Florian served as Commander at the Verndale Legion Post for several years. He was also a member of VFW, Knights of Columbus & Stowe Prairie Township Board. He was a current member of St. Joseph's Catholic Church, in Bertha, MN, where he especially enjoyed seeing all the young children. Florian was preceded in death by his beloved wife, Mildred; parents George and Barbara; brothers Raymond, Jerome and Philip Schmidt; sisters Marion Gulka and Magdalene Schmidt; and daughter-in-law, Rita Schmidt. He will forever be remembered by his children Clarence “Clyde” Schmidt, Geraldine (Steve) Cottrell of Frazee, Kathie (Terry) Davis of Ottertail, Keith (Pam) Schmidt of Sebeka, Marlene (Dale) Campbell, Virgil (Sandy) Schmidt, Perry (Lyn) Schmidt all of Verndale, Harlan Schmidt of Maple Grove and Pamela (Jim) Rach of Brooten; 27 grandchildren and 42 great-grandchildren; brothers Andy, Matt and George Schmidt; sisters Tillie Mullen, Rose Anderson and Jenny Rice; along with many neighbors and friends, including his “wonder cat”, Tiger. Serving as pallbearers will be Florian’s sons. Private interment at the MN State Veteran's Cemetery near Little Falls, MN, will be held at a later date. The family suggests memorials be directed to St. Joseph’s Catholic Church, Bertha, MN.

The Mass of Christian Burial for Florian Schmidt of rural Verndale will be celebrated at 11:00 a.m. on Saturday, December 30, 2017 at the St. Ann's Catholic Church in Wadena with Fr. Mitchell Bechtold as celebrant. Friends may call on Friday... View Obituary & Service Information

The family of Florian Schmidt created this Life Tributes page to make it easy to share your memories.

The Mass of Christian Burial for Florian Schmidt of rural Verndale...

Send flowers to the Schmidt family.