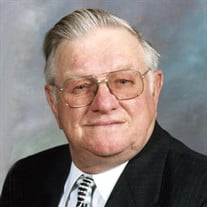 The Mass of Christian Burial for Francis “Frank” Lorentz, of Wadena, will be celebrated at 10:30 a.m. on Monday, August 3, at St. Ann’s Catholic Church in Wadena, with Father Aaron Kuhn as celebrant. Visitation will be held at the Johnson-Schuller Chapel in Wadena on Sunday from 5:00 until 8:00 p.m., with Prayers at 6:00 and Knights of Columbus Rosary at 7:00 p.m. Visitation will resume at the church on Monday from 9:00 a.m. until the time of the Mass. Burial will be in Calvary Cemetery in Wadena followed by a meal at Sunnybrook Park. For those in attendance to any of these events, face masks and social distancing are required. God called Francis “Frank” Joseph Lorentz home on Wednesday, July 29, 2020. Eight days after his 93rd birthday, he passed peacefully with his family by his side at Fair Oaks Lodge in Wadena, Minnesota. Frank was born to Joseph and Anna (Hopp) Lorentz on July 21, 1927, in Wadena Township. He grew up on a farm with his 13 siblings, attended Wadena Public Schools, and graduated with the Class of 1946. After serving in the US Army during the Korean War, Frank was united in marriage with Leona Vandenberghe on May 4, 1954, at Holy Cross Catholic Church in Butler, MN. He and Leona took over the family farm south of Wadena and made a livelihood as dairy farmers. They lived at the homestead and raised seven children there. In 1997, they moved to Bluffton, MN, where they resided until late 2018. Frank was a devoted husband for 66 years and a loving father. He shared his love of the outdoors, fishing and hunting, music and dancing, sense of humor, and positive energy with his family. He was a great role model for his children and grandchildren by being tolerant, supportive, and affectionate. He was very proud of his children and liked to tell people that he had the best kids in the world! Frank was also a fun-loving and funny guy who was always ready with a joke (or ten). In his younger days, he and Leona liked to go out dancing and socializing with friends. He enjoyed many games of backyard volleyball with his children and always loved playing cards, especially whist. Frank was very helpful and generous to family, friends, neighbors, and even strangers seeking a tow out of the ditch, a tank of gas, or a bite to eat. He was a member of the Knights of Columbus, Catholic Aid, the American Legion, and served for many years as a Wadena Township Supervisor.   Left with loving memories of Frank are his wife Leona of Wadena; children Marsha (David) Karam of Nevis, Linda (Duane) Dockter of Grand Rapids, Gregory (Bev) of Alexandria, Anthony (Rachel) Lorentz of Dent, Kurt (Michelle) of Sauk Rapids, Lisa (Tim) Klaphake of Nashwauk, and Brian (Cindy) Lorentz of Medina; 16 grandchildren; 15 great-grandchildren; and siblings Janet Wright of Bluffton and Ruth Ann Theriault of Plano, TX. Preceding Frank in death were his first born daughter at birth; his parents Joe and Anna; and his siblings Leona Hallauer, Phyllis Winger, Isabelle Kresky, Joann Lorentz, Irene Johnson, and Isadore “Nibs,” Mark, Michael, Jerome, Ralph, and Benedict Lorentz. Serving as pallbearers will be grandchildren Terry Lorentz, Steven Maroney, Jacob Karam, Brooke Klaphake, Luke Lorentz, Austin Lorentz, and Ellen Lorentz. Honorary pallbearers will be grandchildren Nicole Weaver, Andrew Lara, Todd Lorentz, Jamie Evans, Shelby Schweigert, Gabriela Kiesel, Hannah Lorentz, Joe Lorentz, Matt Wacker, Ryan Wacker, Nora Lorentz, and Lillian Lorentz. Military honors provided by the Elmer Goche Post 3922, Veterans of Foreign Wars, Wadena, MN.

The Mass of Christian Burial for Francis &#8220;Frank&#8221; Lorentz, of Wadena, will be celebrated at 10:30 a.m. on Monday, August 3, at St. Ann&#8217;s Catholic Church in Wadena, with Father Aaron Kuhn as celebrant. Visitation will be held... View Obituary & Service Information

The family of Francis "Frank" Lorentz created this Life Tributes page to make it easy to share your memories.

The Mass of Christian Burial for Francis “Frank” Lorentz, of...

Send flowers to the Lorentz family.