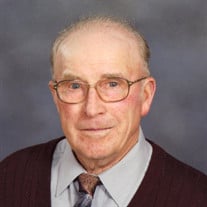 The funeral Mass for Frank Scheller, Jr., of Verndale, will be celebrated at 11:00 a.m. on Wednesday, July 5, at the St. Frederick’s Catholic Church in Verndale with Father Lauren Germann as celebrant. Visitation will be held at the Johnson-Schuller Chapel in Wadena on Tuesday from 5:00 until 7:00 p.m. with a Rosary at 6:00 and Prayers at 7:00 p.m. Visitation will resume at the church on Wednesday from 9:30 a.m. until the time of Mass.   With family at his side, Frank, age 87, passed away on Thursday, June 29, 2017, at Tri-County Healthcare Hospital, Wadena, MN.   Frank was born to Frank Joseph and Amelia (Weinkauf) Scheller on October 29, 1929 in Hankinson, ND. He graduated high school, and in 1952 he joined the military. As a member of the U.S. Army he served during the Korean Conflict. He was honorably discharged in 1954 at Fort Hood, TX.   Frank was united in marriage with Barbara Murdock on June 16, 1955 at St. Frederick’s Catholic Church in Verndale. When they got married in 1955 Frank drove for Wadena Silo Company. He went to full time farming in 1962. By 1971 he went to beef cattle and in 1975 he transitioned to all grain. He started downsizing in1990 with his 1st auction sale.   Frank had a deep faith in God and always attended mass. He loved his wife and family, they could always count on him to help out in time of need. Farming was another love of his life. He was a great caretaker of his family and farm. In 2004 he retired to their present country home. His greatest joy was restoring Farmall Tractors for the past 31 years.   Frank was preceded in death by his parents Frank Sr. and Amelia; sisters, Betty Brockob and Kathryn Harthan.   Frank will be forever remembered by his wife of 62 years, Barbara of Verndale; daughters, Vonnie (Kevin) Perius of Wadena, Shari (Tom) Dalen of Verndale, Jean (Terry) Perius of Verndale, Deb (Curt) Berry of Sebeka; brother, Jim (Barb) Scheller of Bertha; sister, Pat (Alvin) Schwartz of Wadena, along with 11 grandchildren and 20 great-grandchildren.   Honorary pallbearers will be Frank’s granddaughters.   Serving as pallbearers will be Frank’s grandsons; Wayne Perius, Chris Perius, Lance Perius, Brendan Flynn, Jeremy Schwartz, Michael Schultz, Jon Aamot, and Shane Snyder.   Burial will be in St. Frederick’s Catholic Cemetery, Verndale, MN.

The funeral Mass for Frank Scheller, Jr., of Verndale, will be celebrated at 11:00 a.m. on Wednesday, July 5, at the St. Frederick&#8217;s Catholic Church in Verndale with Father Lauren Germann as celebrant. Visitation will be held at the... View Obituary & Service Information

The family of Frank Scheller Jr. created this Life Tributes page to make it easy to share your memories.

The funeral Mass for Frank Scheller, Jr., of Verndale, will be...

Send flowers to the Scheller family.