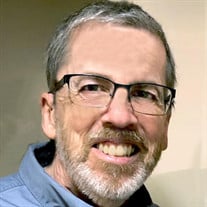 The funeral service for Gary Packer of Wadena will be held at 11:00 am. on Saturday, March 12, at the Wadena Alliance Church. Visitation will be held at the church on Friday, from 4:00 until 7:00 p.m. At 7:00p.m. everyone is invited to a time of prayer and sharing. Visitation will resume at the church on Saturday from 9:30 a.m. until service. Under the care of his loving family and Knute Nelson Hospice, Gary age 62, passed away peacefully at his home surrounded by his family on March 3, 2022 after a battle with brain cancer. Gary Joe Packer was born to Lloyd and Edna (Bowden) Packer on May 31, 1959 in Moorhead, MN. The family lived in Barnesville until he was in the third grade when they moved to Moorhead where Gary graduated in 1977. Gary met Brenda Quanbeck through her sister while he was managing the Mrs. Blow’s Sewing Center. They were married February 9, 1985. They were blessed with Meagan (1988) and Madison (born in China 2004), and later welcomed son-in-law Adam (2008). Gary's greatest desire was to live his life in service for his Lord. He faithfully served at the Roseau Evangelical Covenant and Wadena Alliance Churches. He sang on Worship Teams, served on Boards, lead the sound crew, and coordinated Sunday School for many years. He found joy through planting seeds of faith early in the hearts of children. He was a faithful servant to his Savior. Work experiences for Gary started with food service, appliance repair, and car reconditioning to name a few. By 1990, he decided to make a big life change, and went to college to become a Radiology Technologist. He graduated with an Associate Degree from the UofM-Crookston in 1993, at the top of his class and received the Mallinckrodt Award of Excellence. Gary worked six years for Roseau Area Hospital. He then moved the family to Wadena in 2000 to work for Tri-County Health Care in Radiology and also became the PACS Administrator until the fall of 2020. Gary also had Gary’s Sewing Machine Service & Repair as a side job working out of his home through Hometown Crafts. He enjoyed the challenge of being able to fix things. Gary enjoyed hunting, fishing and all things outdoors. He loved nature, yardwork and being surrounded by God’s creations. He liked to travel with his family, make memories, and was happiest being at the lake. His greatest joy was being with his wife, daughters and son-in-law more than anything else! He was very proud of his children and loved going to every event he could. Preceding Gary in death were his parents, Lloyd and Edna; in-laws Dale and Darlene Quanbeck; and several unborn children. Memories of Gary will be held dear by his devoted wife, Brenda; daughters, Meagan (Adam) Voll of West Fargo, ND and Madison Packer of Wadena. Siblings, Leonard (Judy) Packer of Big Lake, Sharon Harding of Battle Lake, and Debra (Dale) Rickford of Harwood, ND; step mother-in-law, Jeanette Krogstad of Grand Forks, ND; sisters-in-law, Audrey Zejdlik (Tim) of Grand Forks, ND; Debra (Jerry) Roehrich of Wadena and Ellen Unseth of Amarillo, CA; brother-in-law, Aaron (Kristine) Quanbeck of Glyndon; along with nieces, nephews and a host of family, friends, and former co-workers. Honorary pallbearers will be the Tri-County Health Care Radiology Department Staff (past & present). Serving as pallbearers will be Adam and Meagan Voll, Madison Packer, Jim Ash, Dick Grefe, Vince Hinojos, Brian McKenna, and Dave Nelson. Burial will be held at a later date at the New Luther Valley Cemetery, McVille, ND.

The funeral service for Gary Packer of Wadena will be held at 11:00 am. on Saturday, March 12, at the Wadena Alliance Church. Visitation will be held at the church on Friday, from 4:00 until 7:00 p.m. At 7:00p.m. everyone is invited to a time... View Obituary & Service Information

The family of Gary Packer created this Life Tributes page to make it easy to share your memories.

The funeral service for Gary Packer of Wadena will be held at...

Send flowers to the Packer family.