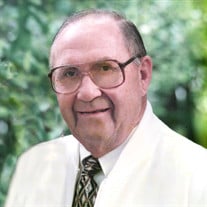 The funeral service for Gene Allen of Wadena, will be held at 3:00 p.m. on Monday, July 15, at the Joyful Spirit United Methodist Church in Wadena, with Pastor Amy Dinkel-VanValkenburg presiding. Visitation will be held on Sunday from 4:00 until 7:00 p.m. at the Schuller Family Funeral Homes’ Johnson-Schuller Chapel in Wadena. Visitation will resume at the church on Monday from 1:30 p.m. until the time of the service. Gene, age 93, passed away surrounded by his family on Tuesday, July 9, 2019, at the Tri-County Health Care Hospital, in Wadena, MN. Loren Eugene “Gene” Allen was born to Clarence and Laura “Cecile” (Lowmiller) Allen on August 10, 1925, in Eagle Grove, IA, and grew up at the Health Home on Stocking Lake near Menahga, MN. After high school he served as a Staff Sargent in the US Army during WWII from 1943 until his honorable discharge in 1946. After returning stateside, Gene was united in marriage with Irma Vanderhoef on July 14, 1946, at her parent’s home in southwest Wadena, where Gene and Irma currently resided. In earlier years, he worked as a fire spotter at the ranger tower near Nimrod, and the Wadena community will remember Gene as a former Chief of Police, and City of Wadena lineman. He appreciated being outdoors while hunting and fishing, and especially when strolling through the woods. Gene also enjoyed playing a good hand of cribbage and rummy. He was a member of the American Legion, VFW, and Masonic Lodge, all in Wadena. Family and friends knew Gene to be a proud, kind and always humble example. He shared his wonderful smile and easy style of chatting with everyone he met. This amazing man who loved his family more than anything will be greatly missed everyday. Gene was preceded in death by his parents, Clarence and Cecile. Gene will be dearly missed by his wife of nearly 73 years, Irma; daughters, Norma Allen and Marilynn (Tony) Uselman both of Wadena; 6 grandchildren and 11 great-grandchildren. Active pallbearers will be Allen Uselman, Dustin Cantrell, Tom Bard, Isaac Bard, Bryan Frederickson, and Justin Uselman. Military honors will be provided by the Elmer Goche Post 3922, Veterans of Foreign Wars, Wadena, MN. Burial will be in Wadena Cemetery, Wadena, MN.

The funeral service for Gene Allen of Wadena, will be held at 3:00 p.m. on Monday, July 15, at the Joyful Spirit United Methodist Church in Wadena, with Pastor Amy Dinkel-VanValkenburg presiding. Visitation will be held on Sunday from 4:00... View Obituary & Service Information

The family of Gene Allen created this Life Tributes page to make it easy to share your memories.

The funeral service for Gene Allen of Wadena, will be held at...