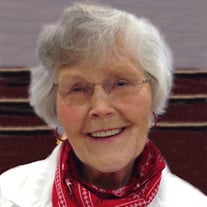 The Mass of Christian Burial for Genevieve “Jenny” Uselman of Wadena will be celebrated at 10:30 a.m. on Monday, September 17, at the St. Ann’s Catholic Church in Wadena, with Father Aaron Kuhn as celebrant. Visitation will be held on Sunday at the Johnson-Schuller Chapel in Wadena from 4:00 until 8:00 p.m. with Christian Mothers Rosary at 5:00 and Prayers at 6:00 p.m. Visitation will resume at the church on Monday from 9:00 a.m. until the time of the Mass. With family at her side, Genevieve, age 88, passed away on Tuesday, September 11, 2018, at the Serenity Living Solutions in Sebeka, MN, with the gentle care of Knute Nelson Hospice. Genevieve “Jenny” was born to Anthony “Barney” and Lucille “Lucy” (Martin) Budig on August 28, 1930, in Leaf River Township, Wadena, County, MN. She was united in marriage with Thomas “Toby” Peter Uselman on October 5, 1953, at St. Ann’s Catholic Church in Wadena. Thomas and Jenny raised six children on the family dairy farm west of Wadena and were happily married for fifty-five years. Jenny had a strong faith and personal relationship with God. She was a longtime member of St. John the Baptist Catholic Church in Bluffton, and served as a Eucharistic Minister, a member of Christian Mothers, teaching Religious Education classes and as a Pregnancy Crisis Hotline volunteer. At home her days were filled with caring for her family, cooking, baking, making popcorn balls, quilting and being a partner to Tom on the farm. She also liked to fish and drive fast! Jenny loved visiting with her sisters and grandchildren. She was competitive and the twinkle in her eyes was especially bright when winning at games and playing cards! Her infectious smile and adventurous spirit will be treasured by those who knew her. In later retirement years Tom and Jenny moved into Wadena and resided in southeast Wadena, and after seven years enjoyed many friendships in the community of Humphrey Manor. Jenny was preceded in death by her husband Thomas on April 13, 2009; parents, Anthony and Lucille; brother Bernard Budig; sister and brother-in-law Donna and Raymond Kern; and brothers-in-law Tom Nyberg, and Sylvester Heltemes. Memories of Genevieve will forever be cherished by her children, Chris (Darlene) Uselman of Bell Fourche, SD, Bruce (Joyce) Uselman of Wadena, JoAnn (Gerald) Radermacher of Grand Rapids, Tim (Tamara) Uselman of Pelican Rapids, Jean (Mike) Straw of Pinedale, WY, and Lisa (John) Wegscheid of Wadena.; 13 grandchildren, and several great-grandchildren; siblings Cecelia Heltemes, Iris Meckel-Nyberg, Sr. Rita Budig OSB, Carol (Phil) Tabery and David (Doris) Budig; sisters-in-law Vicky Budig, Susie (George) Ditsworth, and “Dottie” (Gary) Towery; and many nieces and nephews. Pallbearers will be Gerry Radermacher, Tim Uselman, Bruce Uselman, Chris Uselman, John Wegscheid and Michael Wensman. Burial will be next to her husband in Calvary Cemetery, Wadena, MN.

The Mass of Christian Burial for Genevieve &#8220;Jenny&#8221; Uselman of Wadena will be celebrated at 10:30 a.m. on Monday, September 17, at the St. Ann&#8217;s Catholic Church in Wadena, with Father Aaron Kuhn as celebrant. Visitation will... View Obituary & Service Information

The family of Genevieve "Jenny" Uselman created this Life Tributes page to make it easy to share your memories.

The Mass of Christian Burial for Genevieve “Jenny” Uselman of...

Send flowers to the Uselman family.