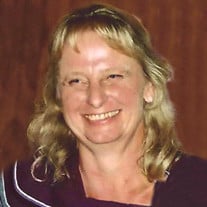 The open house celebrating the life of Georgia Toftum, of Perham and formerly of Verndale, will be held on Saturday, July 10, from 12:00 until 3:00 p.m. at the Lions Shelter (#2) in Sunnybrook Park, Wadena, with Pastor Jim Stoneman presiding. A Time for Prayer and Sharing Memories will begin at 2:00 p.m. Georgia Mae (Anderson) Toftum was born on January 26, 1958, in Wadena, MN. Her parents were John "Rodney" Anderson and Doris "Dorie" (Nelson) Anderson. Georgia grew up in Verndale where she attended Verndale High School. After graduation she attended Wadena Technical College for Office Administration. While working in Wadena, she met David Toftum. On October 27, 1979 they were married in the Verndale Methodist Church. They started a family in Bemidji, MN before moving back to Verndale where they resided for 15 years. They had three children together, Connie, Mat, and Jeff, and her family grew with the addition of three grandchildren whom she loved very much: Jenna, Aaron, and Blake. Georgia had several jobs. When moving back from Bemidji she cooked at her mother's café “Dorie's Diner” and at the Wadena County DAC for many years where she drove bus and assisted clients. She also worked at the R&J Arena where her homemade cakes and bars were loved by all. On June 28, 2014 Georgia married Dennis (Denny) Benson at their home in Perham, MN. They spent their summers in Minnesota riding motorcycle and enjoying the outdoors. In the winter they headed south to Apache Junction, AZ. Georgia was a quilter for many years. One of her favorite quilts to make was out of blue jeans. She created her own designs and patterns and loved giving these as gifts to her loved ones. While enjoying her home in Perham Georgia planted flowers which she proudly displayed on her deck. Georgia passed away on February 20, 2021, in Gilbert, AZ. She is preceded in death by her father, Rodney Anderson; mother, Dorie Anderson; sister, Connie Anderson; and brother, Jerome Anderson. She is survived by her husband, Denny; children, Connie (Greg) Krueger of Motley, Mat (Jamie) Toftum of Deer Creek and Jeff (Larissa Jones) Toftum of Verndale; grandchildren Jenna, Aaron, and Blake; along with siblings, John Anderson, Mary Wulf, Deb Teigen, and Mike (Donna Cronin) Anderson. She will be missed by her nephews and nieces, aunts, uncles, cousins, and friends. Honorary urn bearers will be Georgia’s grandchildren. A private burial will be in Green Lawn Cemetery, Verndale, MN.

The open house celebrating the life of Georgia Toftum, of Perham and formerly of Verndale, will be held on Saturday, July 10, from 12:00 until 3:00 p.m. at the Lions Shelter (#2) in Sunnybrook Park, Wadena, with Pastor Jim Stoneman presiding.... View Obituary & Service Information

The family of Georgia Toftum created this Life Tributes page to make it easy to share your memories.

The open house celebrating the life of Georgia Toftum, of Perham...

Send flowers to the Toftum family.