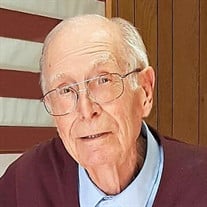 A Celebration of Life Open House for Gerald Albright will be held from 1:00 until 3:00 p.m. on Sunday, May 21, 2017 at the Johnson-Schuller Chapel in Wadena, with a Time of Remembrance at 2:30 p.m. Gerald Dewight Albright, 96, of Wadena died on March 1, 2017 after a brief illness. The youngest of four children, he was born on August 13, 1920 in Hamilton County, Iowa to John Thomas and Clara Schweppe Albright. Gerald grew up in the depression years and spent his early days attending country school, helping his parents on their truck farm, and playing by the Boone River. He received his nickname, “Buster”, during this time after falling off a gate and busting his arm. He was known affectionately as Grandpa Buster to his grandchildren. Gerald graduated from Webster City High School in 1936 and continued his education at Fort Dodge Business School where he completed the bookkeeping course. Gerald began his association with Chevrolet/General Motors shortly after this as he worked as a bookkeeper/parts man for various dealers in the area. He enlisted in the U.S. Army during World War II and was deployed through Ft. Snelling. He served in the 11th Armored Division in the European Theater in Germany. It was during this time he met Paul Keintz who would become not only his best friend, but his business partner for many years. Both men had dreams of owning a car dealership and used their GI Bill to open Albright-Keintz Chevrolet in Atwater, MN in 1949 and later moved their business to Benson, MN. During this time he was an active member of the Minnesota Auto Dealers Association. Gerald married Carol Ruth Braun and the couple had four children, Keene (Carole) of Moscow, Idaho; Terry of Conroe, Texas; Jeanette (Robert) of Henning; and Dennis (Karen) of Mounds View. Gerald was active in Benson as he was a member of the VFW, Chamber of Commerce, and served on the city council. He was especially pleased to be asked to play in the men’s bridge club as Jerry loved the challenge of the game. Along with living in Benson, Jerry and Carol enjoyed the quiet of Lake Scandi during the summer months. Gerald began semi-retirement in 1971 and the couple spent several months a year in Florida and the rest of the time in Minnesota. The couple enjoyed their retirement fully as they entertained, golfed, played cards, shelled, and just relaxed in the sunshine. Jerry and Carol returned to Minnesota in 1997 and made their residence in Wadena, MN where he took care of his wife until her passing in 2004. He will be remembered for his love and dedication to his family especially welcoming company and reminiscing about the past particularly after 5:00 each day. He would insist that “we put a little something in our pocket for later.” Jerry had a fierce philosophy of independence to the very end. He did not play golf in his youth, but he did take up the sport later in life, and eventually developed a passion for the game, never missing a golf tournament broadcast. Gerald also developed a knack for technology and thrived using his skills to communicate with friends and family. Gerald was preceded in death by his wife, Carol Ruth; his three siblings, Harold, Estelene, and Bernice; his mother and father, John and Clara; a great-grandson, Scott Alan; and an unborn great-grandson, Gradin Ryan. He is survived by his four children, Keene (KC), Terry, Jeanette, and Dennis along with his grandchildren: Robert Albright, Adam (Michele) Albright, Anthony (Molina) Albright, Michael (Debi) Albright, Leah (Lance) Campbell, Jared (Nell) Polzine, Merrin (Mark) Lust, David (Sarah) Albright, and Bonnie (Adam) Farrell. Step-grandchildren include: Jon, Teena, Christopher, Mandy, Michelle, and Amber. Great-grandchildren are: Sapphire and Krystal Albright; Andrew and Joshua Albright; Emma and Carter Albright; Alexandra and Johnathan Albright; Norah, Elise, and Audrey Campbell; Maizie and Wyan Polzine; Jameson Lust; and Elizabeth, Thomas, and Lily Albright. He is also going to be missed by his dear neighbors, Doug and Ellen Carlstrom. Interment will be at the Minnesota State Veterans Cemetery near Little Falls on Monday, May 22, 2017. Gerald will be missed by his family and friends, but we can take great comfort in the fact that he, like his father and grandfather “leaves his family the priceless heritage of a good name.”

A Celebration of Life Open House for Gerald Albright will be held from 1:00 until 3:00 p.m. on Sunday, May 21, 2017 at the Johnson-Schuller Chapel in Wadena, with a Time of Remembrance at 2:30 p.m. Gerald Dewight Albright, 96, of Wadena died... View Obituary & Service Information

The family of Gerald Albright created this Life Tributes page to make it easy to share your memories.

A Celebration of Life Open House for Gerald Albright will be...

Send flowers to the Albright family.