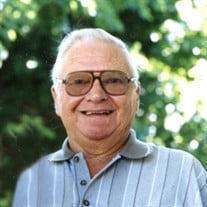 Gerald “Jerry” Louis Szczech passed away at the age of 87 years on Saturday, April 14, 2018 at his home in Wadena, MN, surrounded by his loving wife and family. A Mass of Christian Burial will be held at 11:00 a.m. on Thursday, April 19, 2018 at St. Ann's Catholic Church in Wadena. Parish prayers will be held at 7:00 p.m. on Wednesday at the Schuller Family Funeral Homes in Wadena. Friends may call at the funeral home on Wednesday from 5:00 until 7:00 p.m. and at the church on Thursday from 9:30 a.m. until the time of mass. Jerry was born on April 6, 1931 in Minneapolis, MN to Stanley C. and Nellie Margaret (Keech) Szczech. He married the love of his life, Marilyn Helberg, on March 20, 1951 and they enjoyed 67 years of marriage. Jerry worked for Leef Brothers, Inc. for 35 years as a Driving Salesman delivering industrial uniforms and supplies to businesses throughout Minnesota where he enjoyed visiting with and helping his many customers. He was very involved in his community and was a 55 plus-year member of the Wadena Elks Lodge, Wadena Golf Course, and St. Ann's Catholic Church. Jerry loved life and spent many hours golfing, bowling, and visiting with the guys. He was an avid hunter and ice fisherman and had many other hobbies including gardening, woodworking, cooking, and shopping. Additionally, he took his family on many camping and fishing outings with his brothers and their families often joining. After retiring, Jerry and Marilyn spent several years wintering in Florida where they enjoyed going to the beach and taking in various events. In his later years, Jerry strived to be on the golf course as much as possible and enjoyed spending time with Marilyn and his family watching the Vikings, Twins, NASCAR racing, the Minnesota Wild, and Western movies. Jerry adored his family and will be remembered for his smile and friendly nature. Left to cherish his memory are his wife Marilyn, children Gerald “Jerry” Jr. (Sue) of Grand Rapids, MN, Jody (Ken) Ovrebo of Canon City, CO, Jeff of Massillon, OH, Janine (Chuck) Beck of Apache Junction, AZ, Janet (Bruce) Johnson of Perham, MN, Jackie (Doug) Wetteland of River Falls, WI, and Janell (Mike) Schiller of Sartell, MN; sister Deloris (Don) Hanson, brothers Donny (Claudette) Szczech and Bob Jungwirth, 17 grandchildren, 9 great grandchildren, and many nieces, nephews, relatives, and friends. Preceding Jerry in death were his parents and brother Stanley Szczech Jr. Burial will be in Calvary Cemetery, Wadena, MN.

The family of Gerald "Jerry" Szczech created this Life Tributes page to make it easy to share your memories.

Gerald “Jerry” Louis Szczech passed away at the age of 87 years...

Send flowers to the Szczech family.