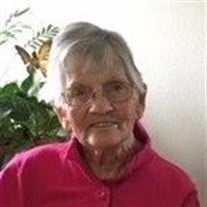 Gertrude Elizabeth (Gossler) Neuerburg passed away at her home in Wadena, on Tuesday, March 26, 2019. A Memorial Mass and Celebration of Life for her and her husband, Herb, who passed away March 10, 2019, will be celebrated at 11:00 a.m. on Saturday, April 13, at St. Ann’s Catholic Church in Wadena, with a Rosary at 10:30. A time of sharing will be held in the Parish Hall after the family returns from the burial in Calvary Cemetery. Trudy was born to Joseph and Anna (Laumeyer) Gossler on October 13, 1925, in their rural Long Prairie, Minnesota, home. She graduated from Long Prairie High School in 1944 and moved to Minneapolis where she was employed at Precision Contacts. Co-workers from Precision introduced her to Herb in 1946, and they began letter correspondence, which led to a marriage proposal in June 1949. They were united in marriage on October 8, 1949, at St. Mary of Mount Carmel Church in Long Prairie. They soon purchased a neighboring home from Herb’s parents where they quickly grew a family; first with twins, then the adoption of 2 children, followed by the births of another 9 children, including a set of triplets and another set of twins! By 1960, they had created a family of 13 children. Trudy’s life revolved around this lively clan. Though she had several part time jobs, including writing a weekly column, “The High Prairie News”, for the Wadena Pioneer Journal, her main occupation was homemaking. She loved to travel as long as destinations included some family along the way. In retirement, she and Herb enjoyed many years wintering in Texas. She relished the years they spent at their Lake Shamineau home. Trudy was a master letter writer, keeping families informed and connected. Her memory held the birth dates of family and friends, and she remembered them all with greeting cards. Other favorite activities included embroidery, reading (sometimes 2 or 3 books a week!), playing Scrabble, and card games with family and friends. Though very modest about herself, Trudy had no qualms about sharing stories about her kids and grandkids! Trudy was preceded in death by her husband of 69 years, Herb; her parents, Joseph and Anna; her siblings and their spouses- sister Lorraine Hedin, and brothers Rudy, Henry, Edward; her sons Charles, David, and Kevin; daughter-in-law Carol, and son-in-law Paul Robinson, and granddaughter Mary Ann Neuerburg. Surviving Trudy are: daughters Joy Robinson, Becker; Diane (Jerry) Anderson, Wadena & Tucson; Sheila (Tom) Smiley, Auburn, NE; Connie (Mike) Shockman, Baxter; Ruth (Phil) Chrisjohn, Shawnee, KS; Jean Williams (Tim Karas), East Bethel; sons Marvin (Kim), Spring Lake; Nicholas (Nonie), Shelton, WA; Richard, Denver, CO; and Philip (Julie), Fairbury, NE; 27 grandchildren; 50 and still counting great and great-great grandchildren; brothers Florian and Robert (Shirley); sister-in-law Jean Gossler, and a multitude of relatives and friends. Memorials are preferred to Knute Nelson Hospice, Wadena, or the Wadena City Library.

Gertrude Elizabeth (Gossler) Neuerburg passed away at her home in Wadena, on Tuesday, March 26, 2019. A Memorial Mass and Celebration of Life for her and her husband, Herb, who passed away March 10, 2019, will be celebrated at 11:00 a.m. on... View Obituary & Service Information

The family of Gertrude "Trudy" Neuerburg created this Life Tributes page to make it easy to share your memories.

Gertrude Elizabeth (Gossler) Neuerburg passed away at her home...