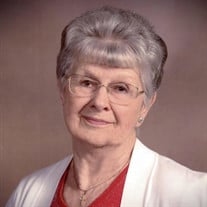 The funeral service for Gladys Finck of Wadena, will be held at 11:00 a.m. on Friday, July 30, at the Verndale Alliance Church with Pastor Daryl Jacobson presiding. Visitation will be held at the church on Friday from 9:30 a.m. until the time of the service. Gladys, age 92, passed away on Monday, July 26, 2021, at her home in Wadena, MN, under the compassionate care of Knute Nelson Hospice. Gladys Arlene Brunko was born to William and Ella (Thielman) Brunko on June 26, 1929, in Wadena County, MN. She was baptized on April 20, 1930, at St. Paul’s Evangelical Church and confirmed May 30, 1943, at St. John Lutheran Church, both in Wadena. Gladys attended country school through the fifth grade before going to Wadena Public Schools where she graduated with the Class of 1947. Gladys married Maurice Franklin Finck on April 20, 1948, at the St. John Lutheran Church parsonage in Wadena. Gladys worked as a secretary at Ebner Insurance in Wadena, and later, in Verndale as a teller at the First National Bank. Starting in 1981, Gladys and Maurice spent winters in Arizona and New Mexico until 2008. She enjoyed their hobby farm north of Verndale, before living on Potato Lake near Park Rapids for 11 years, and lastly, in Wadena. She was a lifetime member of the Disabled American Veterans Auxiliary. Over the years, Gladys’ interests and hobbies included playing cards and board games, and working crossword puzzles. Preceding Gladys in death were her husband of 65 years, Maurice (April 6, 2014); parents William and Ella; son, Maurice Chris Finck; brothers, Wayne and Jerry Brunko; sister, Deloris and her husband, Bill Decker; in-laws, Chris and Clara Finck; and stepmother-in-law Carol Sandback. Gladys will always be remembered by her sons, Dick (Deb) of Bertha, Gene (Vicky) and Dave (Linda Olson) both of Verndale; nine grandchildren, 21great-grandchildren and five great-great-grandchildren; daughter-in-law, Marlene Finck of Staples; sister, Helen Moore of Lakewood, CO; sister-in-law, Vicky Brunko; along with a host of nieces, nephews, and friends. Pallbearers will be Dale Finck, Shane Finck, Casey Finck, Josh Bahls, Ryan Finck, Dustin Snyder and Nathan Moe. Burial will be held at a later date in Wadena Cemetery, Wadena, MN.

The funeral service for Gladys Finck of Wadena, will be held at 11:00 a.m. on Friday, July 30, at the Verndale Alliance Church with Pastor Daryl Jacobson presiding. Visitation will be held at the church on Friday from 9:30 a.m. until the time... View Obituary & Service Information

The family of Gladys Finck created this Life Tributes page to make it easy to share your memories.

The funeral service for Gladys Finck of Wadena, will be held...

Send flowers to the Finck family.