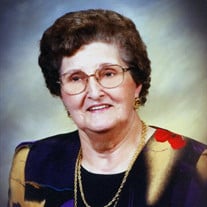 The funeral service for Gladys Putikka will be held at 11:00 a.m. on Wednesday, August 1, at the St John Lutheran Church in Wadena, with Pastor Stephen Meltzer presiding. Visitation will be held on Tuesday from 5:00 until 8:00 p.m. at the Johnson-Schuller Chapel in Wadena, and will resume at the church on Wednesday from 9:30 a.m. until the time of the service.   With family at her side, Gladys passed away one week after her 97th birthday, on July 25, 2018, at Fair Oaks Lodge, Wadena, MN, with the compassionate attention of Knute Nelson Hospice Care.   Gladys was born the youngest of seven children to John Henry and Electa Maria (Smith) VanWinkle on July 18, 1921, in Courtenay, ND. She attended country school and Courtenay High School. Gladys and George Henry Pitcher were married on December 9, 1937. They made their home in Courtenay and later Jamestown, where George worked for Jamestown Plumbing and Heating. By November of 1951, they moved with their five children to a farm south of Bluffton, MN. George continued working as a plumber until his health failed. The fall of 1963 they moved to nearby Wadena. They were active as 4-H leaders for five years, with Gladys as the Sewing Leader. George passed away on December 16, 1972. Gladys was employed at Homecrest, Ind. from March 1962 through September 1982.   Gladys Pitcher was united in marriage with Oliver Putikka on August 14, 1982 in Wadena. Both were retired and enjoyed exploring numerous states and countries together. At home they were active in the VFW as officers, Color Guard, and volunteers. She proudly served three years as VFW Auxiliary President, and was the chairperson for sewing at the Fargo and St. Cloud VA Medical Centers, making many lap robes for the VA and local veterans and their families, and the needy. Locally, Gladys volunteered as a Pink Lady at Tri-County Healthcare crocheting cozy baby caps for the newborns. She was a member of St. John Lutheran Church, and Wadena TOPS Chapter having maintained KOPS status for 35 years.   Gladys was preceded in death by her husbands George and Oliver; parents John and Electa; daughter Sharon Taves; son Larry Pitcher; daughter-in-law Marge Pitcher; great-granddaughter Braelynn Johann-Crabb; brothers and sisters-in-law Clarence (Bessie), Henry (Zelda), and Allen (Nina) VanWinkle; sisters and brothers-in-law Gracie (Orville) Price, May (Otto) Kracht and Ora (Ross) Morris; brother-in-law Milan (Elsie) Pitcher; sister-in-law Janie Simanik and Pearl Quasney; brothers-in-law Rudy (Doris) Putikka and John Putikka; and sister-in-law Anita (Arne) Kol.   Survivors include her children Ken Pitcher of Glenwood; daughters Edna (Vern) Van Orsdel of Wadena; daughter Diane (Jerry) Crabb of Sebeka; 16 grandchildren, 34 great-grandchildren and 9 great-great-grandchildren; and numerous friends.   Honorary pallbearers will be Gladys’ great-grandchildren. Active pallbearers will be her grandchildren. Burial will be at the Wadena Cemetery, Wadena, MN.

The funeral service for Gladys Putikka will be held at 11:00 a.m. on Wednesday, August 1, at the St John Lutheran Church in Wadena, with Pastor Stephen Meltzer presiding. Visitation will be held on Tuesday from 5:00 until 8:00 p.m. at the Johnson-Schuller... View Obituary & Service Information

The family of Gladys Putikka created this Life Tributes page to make it easy to share your memories.

The funeral service for Gladys Putikka will be held at 11:00...

Send flowers to the Putikka family.