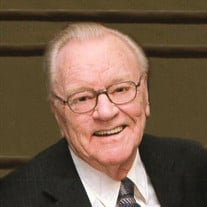 The funeral service for Harold Johnson of Eagle Bend will be held at 2:00 p.m. on Thursday, August 26, 2021 at the Immanuel Lutheran Church in Eagle Bend, with Pastor Justin Hesterman presiding. Friends may call at the church on Thursday from 12:30 p.m. until the time of service. Harold Oscar Johnson, the son of Oscar and Agnes (Gunderson) Johnson, was born just a few minutes before his twin brother Herbert, on April 11, 1929, in Pennock, Minnesota. Growing up on a Minnesota farm, Harold attended a one-room school near Spicer, until the family moved to a farm in the Eagle Bend area in 1939. Near the end of World War II he briefly attended the School of Agriculture in Morris, until he was called upon to return home to help his family operate their farm. On June 21, 1950, Harold married Shirley Guse in Long Prairie, Minnesota. They made their home in the Rose City area until moving to the Alexandria area in 1974. Harold worked for many years in the dairy business; as Manager of the Rose City and Garfield Creameries and later as a Stationary Engineer for Land-O-Lakes in Alexandria, before retiring in 1990. Harold and Shirley were blessed with three children: Diane, Julie, and Russell Lee; in 1963 their family graciously welcomed Mark and Russell Dean (Johnson). In 1992 Harold and Shirley moved to Eagle Bend where they both celebrated their Golden Years until Shirley passed away in 2006. Later in life Harold lived in Minneapolis with Jim and Diane. Harold was an active member of the community, serving as Eagle Bend Council member for 4 years. Harold enjoyed card playing, especially with his card club group. He was a member of the Eagle Bend Senior Citizens, and together with his late wife Shirley they delivered Meals-on-Wheels for several years. He also became an avid reader and was a regular patron at the local library. He was a lifelong member of Immanuel Lutheran Church of Eagle Bend. He deeply enjoyed listening to Polka Spotlight, tapping his foot right up to the end. Harold died peacefully on August 22, surrounded by family at the Diamond Willow Advanced Care Assisted Living facility in Alexandria, under the care of Douglas County Hospice and caring staff. He was 92 years old. He was preceded in death by his parents; wife Shirley, son Russell Lee, sister Marilyn, brothers Herbert and Donald. He is survived by children; Diane (Jim) Theusch of Minneapolis, MN; Julie Bowland of Lakeville, MN; Mark (Lori) of Coon Rapids, MN; and Russell Dean (Teresa) of Alexandria, MN; 6 grandchildren, 10 great-grandchildren, along with nieces, nephews, relatives and friends. Burial will be in the Immanuel Lutheran Cemetery, Eagle Bend, MN.

The funeral service for Harold Johnson of Eagle Bend will be held at 2:00 p.m. on Thursday, August 26, 2021 at the Immanuel Lutheran Church in Eagle Bend, with Pastor Justin Hesterman presiding. Friends may call at the church on Thursday from... View Obituary & Service Information

The family of Harold Johnson created this Life Tributes page to make it easy to share your memories.

The funeral service for Harold Johnson of Eagle Bend will be...