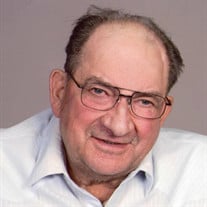 The Memorial Mass for Harold Schlueter, of Bertha will be celebrated at 10:30 on Friday, November 5, at St. Joseph’s Catholic Church in Bertha with Father Aaron Kuhn as celebrant. Visitation will be held on Thursday, from 5:00 until 8:00 p.m. with a KC Rosary at 5:00 and prayers at 6:00 at the Domian-Anderson Chapel in Bertha. Visitation will resume at the church on Friday from 9:00 a.m. until the time of the Mass. With family at his side, Harold Fredrick Schlueter, age 79, passed away on October 7, 2021, at the Sanford Medical Center in Thief River Falls, MN, of declining health and complications from injuries sustained in a recent auto accident.   Harold Fredrick Schlueter was born to Harold Frank and Margaret Anna (Luedtke) Schlueter on August 3, 1942, at Litchfield, MN.  He attended country school at Cedar Mills, MN and graduated from Hutchinson High School in 1960.  He attended the University of Minnesota - St. Paul for three years.   Harold was united in marriage with Annita Marie Zimmerman on April 11, 1964 at Sacred Heart Catholic Church in Waseca.  They farmed and raised dairy cows in Cedar Mills and Darwin, and eventually settled in rural Bertha in 1982.  Upon retiring from farming, he and Annita began working at Walmart in Wadena where he covered several departments.    Harold had a dry wit and kept his humor to the end.  He was a faithful Catholic with a firm belief in his salvation through Jesus Christ. He enjoyed playing cards and visiting with neighbors as well as traveling. He participated in 4-H, FFA, and was a member of the Knights of Columbus.   Preceding Harold in death were his wife Annita (Feb. 2012); parents Harold and Margaret; and sister, Emmaline (Schlueter) Therres. He was also preceded in death by in-laws David, Sr and Margaret Zimmerman.   Surviving Harold are his daughter, Marceen (Patrick) Hammer of Gully, MN; sons, Gerald (Chelsea) of Lincoln, CA, Myron (Louise) of Severna Park, MD, Erick (Charisse) of Stanchfield, MN, and Wayne (Wendy) of Elk River, MN; 19 grandchildren; siblings, Mary Reitz, Eugene (Jill) Schlueter, Janice (Robert) Sutter, and Eileen (Glen) Hardin; along with brother-in-law, Len Therres.   Honorary pallbearers will be his grandchildren, Brittany (Ginn-Dubose) Weisinger, David Schlueter, Jordan Schlueter, Linnea Schlueter, Darcy Schlueter, Maccabee Hammer, Annika Schlueter, Meosha Hammer, Noah Schlueter, Jaquincy Hammer, Sonja Schlueter, Obadiah Hammer, Rachel Schlueter, Gabriella Schlueter, Tobias Schlueter, Theodore Maged, Rashariah Hammer, Josiah Schlueter, and Leah Schlueter.   Burial will be in St. Columban Cemetery, Greenleaf Township, Meeker County, MN.

The Memorial Mass for Harold Schlueter, of Bertha will be celebrated at 10:30 on Friday, November 5, at St. Joseph&#8217;s Catholic Church in Bertha with Father Aaron Kuhn as celebrant. Visitation will be held on Thursday, from 5:00 until 8:00... View Obituary & Service Information

The family of Harold Schlueter created this Life Tributes page to make it easy to share your memories.

The Memorial Mass for Harold Schlueter, of Bertha will be celebrated...

Send flowers to the Schlueter family.