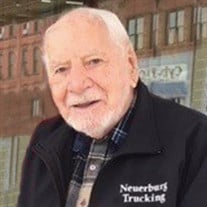 A memorial Mass celebrating the lives of Herbert and Gertrude "Trudy" Neuerburg, of Wadena, will be celebrated at 11:00 a.m. on Saturday, April 13, at St. Ann's Catholic Church, with a Rosary at 10:30. A time of sharing will beheld in the Parish Hall after the family returns from the burial in Calvary Cemetery. Herbert Nicholas Neuerburg passed away at Tri-County Health Care in Wadena, MN, on Sunday, March 10, 2019. He was 95 years old.   Herb was born to Nicholas and Louise (Tabery) Neuerburg on February 14, 1924, in rural Wadena.  He attended St. Ann’s School through 8th Grade, obtaining his GED many years later.   Herb was united in marriage to Gertrude (Trudy) Gossler on October 8, 1949, at St Mary of Mount Carmel Church in Long Prairie, Minnesota.  After a short stint selling magazines, they bought a home from his parents in Wadena Township.  They created a family of 13 children on this small farm.  In addition to farming, Herb worked in numerous other occupations including driving truck for Northern Coop and selling farm equipment.  His main career involved selling sanitation products for the Sep-ko/ Monarch Chemical/ H.B. Fuller Company, which eventually prompted the family move to Fairbury, Nebraska in 1968.  His territory included much of the Midwest, and he traveled hundreds of thousands of miles over the approximately 30 years of his employment. He retired in 1987, and he and Trudy returned to Minnesota. He then spent another decade organizing bus trips to various casinos.    Herb had a unique sense of humor, an adventuresome spirit, and enjoyed meeting new people! He and Trudy enjoyed over 25 years of wintering in various parts of Texas, as well as spending summers at their Lake Shamineau home.  Favorite pastimes included working in his yard, fishing, keeping up with current issues, putting puzzles together, and playing cards.  He was active in the St. Ann’s Knights of Columbus and Catholic Order of Foresters.   Herb was preceded in death by his parents, Nick and Louise, his siblings and their spouses- sisters Marie Willan, Cyrilla Erickson, Bertillia Imdieke, and brothers Bernard, Leo, Norbert, Lawrence, and Clement; his sons Charles, David, and Kevin; daughter-in-law Carol, and son-in-law Paul Robinson, and granddaughter, Mary Ann Neuerburg.    Surviving Herb are: his loving wife of 69 years, Trudy, of Wadena; daughters Joy Robinson, Becker, Diane (Jerry) Anderson, Wadena and Tucson; Sheila (Tom) Smiley, Auburn, NE, Connie (Mike) Shockman, Baxter, Ruth (Phil) Chrisjohn, Shawnee, KS, Jean Williams (Tim Karas), East Bethel; sons Marvin (Kim), Spring Lake, Nicholas (Nonie), Shelton, WA, Richard, Denver, CO, and Phillip (Julie), Fairbury, NE; 27 grandchildren, 50 and still counting great and great-great grandchildren; sister-in-law Vivian Neuerburg, and a multitude of relatives and friends.    Memorials are preferred to the St. Ann’s Religious Ed Program or Knute Nelson Hospice, Wadena.

A memorial Mass celebrating the lives of Herbert and Gertrude "Trudy" Neuerburg, of Wadena, will be celebrated at 11:00 a.m. on Saturday, April 13, at St. Ann's Catholic Church, with a Rosary at 10:30. A time of sharing will beheld in the... View Obituary & Service Information

The family of Herbert "Herb" Neuerburg created this Life Tributes page to make it easy to share your memories.

A memorial Mass celebrating the lives of Herbert and Gertrude...