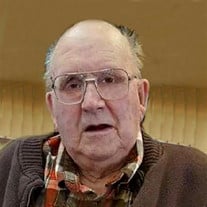 The funeral service for Herman Chilberg, of Staples and formerly of Aldrich, will be held at 11:00 a.m. on Friday, December 29, at the Balsamlund Lutheran Church in rural Aldrich, with Pastor Del Moen presiding. Visitation will be held at the Verndale Chapel on Thursday from 5:00 until 7:00 p.m. and will resume at the church on Friday from 9:30 a.m. until the time of service. With family at his side, Herman, age 94, passed away on Tuesday, December 19, 2017, at the Lakewood Health System Care Center, Staples, MN. Herman was the only son born in a family of eight girls, to Andrew Nicholas “Claus” and Mary Louisa “Mamie” (Lindblom) Chilberg on January 15, 1923, in Bartlett Township, Todd County, MN. Herman attended Country School District #136 through the eighth grade and graduated with the Class of 1941 at Staples High School. He was united in marriage with Grace Rodell Holm on March 7, 1948 at the Balsamlund Lutheran Church. He was a devoted farmer dealing with all the tasks involved and took the time to participate in the Farmers Union bus trips to Washington DC and Colorado. He loved playing a good hand of cards, listening to music, along with deer hunting, and gopher “hunting” with his grandchildren. His good sense of humor was shared with everyone he met! Herman was a member of the Farmers Union and the Balsamlund Lutheran Men’s Club. Herman lived in rural Aldrich for 86 years. After leaving the farm he moved to the Lakewood Senior Center in Staples for a year, Lakewood Pines for two years, followed by six years at the Central Todd County Care Center in Clarissa. In October of 2017, Herman returned to the Lakewood Senior Center. Herman was preceded in death by his wife, Grace on December 6, 1952; parents Claus and Mamie; sisters Edna Strand, Ruth Peterson Crabb, Alice Nelson Crosgrove, Inez Olson, Myrtle Paschke, Mildred Chilberg, and Hazel Wiese; son-in-law Michael Kobliska; and special friend Gloraine Horn. He is survived by his son Dion (Kay) Chilberg of Casa Grande, AZ; daughters Bonnie (Barry) Thoele of Staples and Mary (Gerald) Horn of Verndale; sister Marian Fuller of Staples; four grandchildren, four great-grandchildren and five great-great-grandchildren; along with three step-grandchildren and nine step-great-grandchildren; brother-in-law Walt Wiese; and numerous nieces and nephews. Honorary Pallbearers will be all of Herman’s grandchildren, great-grandchildren and great-great-grandchildren. Active pallbearers will be Chris Horn, Paul Kopp, Jason Horn, Paul Adamietz, Mark Wiese and David Fuller. Burial will be in Balsamlund Lutheran Cemetery, Aldrich , MN.

The funeral service for Herman Chilberg, of Staples and formerly of Aldrich, will be held at 11:00 a.m. on Friday, December 29, at the Balsamlund Lutheran Church in rural Aldrich, with Pastor Del Moen presiding. Visitation will be held at... View Obituary & Service Information

The family of Herman Chilberg created this Life Tributes page to make it easy to share your memories.

The funeral service for Herman Chilberg, of Staples and formerly...

Send flowers to the Chilberg family.