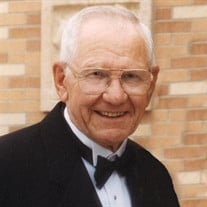 The funeral service for Howard Schwartz of Cambridge, MN, and formerly of Wadena, will be held at 11:00 a.m. on Friday, March 2, at the United Methodist Church in Wadena, with Pastor Lee Kantonen presiding. Visitation will be at the church on Friday from 9:30 a.m. until the time of the service. Howard, age 93, passed away on Friday, February 23, 2018, at the GracePoint Commons Care Center in Cambridge, MN. Howard was born to Otto Ernest and Nora (Conn) Schwartz on November 2, 1924, in Wadena, MN. He attended country school through the eighth grade. Howard was united in marriage with Beatrice “Bea” Alberta Johnson on April 29, 1944, at the United Methodist Church in Wadena. He entered the US Army in December of that year and was honorably discharged as a Pvt. 1st Class at Ft Sheridan, IL, in November 1946. They made their home north of Wadena for 65 years before moving to Isanti County in 2013, to be closer to their family. He will be remembered as a hardworking and dedicated dairy farmer until his retirement in 1991. His appreciation of nature continued as he hunted, fished and snowmobiled. Howard’s gentle, yet firm, demeanor made him a favorite Wadena Public School bus driver for over 35 years. He was a member of the VFW Post 3922 in Wadena and the American Legion in Sebeka. Howard was preceded in death by his wife, Bea, on November 2, 2015; parents Otto and Nora; in-laws Walter and Olive Johnson; three brothers; and a sister. He is survived by his sons Darrel (Jennifer) Schwartz of Dassel, Duane (Joan) Schwartz of Harris and Keith (Stacey) Schwartz of St. Francis; daughters Danene (Frank) Kaminski of Phoenix, AZ, and Virginia (David) Anderson of Corcoran; 17 grandchildren, 22 great-grandchildren & 3 great-great-grandchildren; brother-in-law Wallace Coson; and sisters-in-law Betty Ann Kamin and Dorothy Schwartz; along with a host of friends. Active pallbearers will be Jeff Schwartz, Matthew Schwartz, Nate Anderson, Matt Anderson, Travis Schwartz, and Colten Schwartz. Military Honors will be provided by the Elmer Goche Post 3922, Veterans of Foreign Wars, Wadena, MN. Burial will be in Wadena Cemetery, Wadena, MN. At the family’s request, memorials may be directed to the United Methodist Church, Wadena, MN.

The funeral service for Howard Schwartz of Cambridge, MN, and formerly of Wadena, will be held at 11:00 a.m. on Friday, March 2, at the United Methodist Church in Wadena, with Pastor Lee Kantonen presiding. Visitation will be at the church... View Obituary & Service Information

The family of Howard Schwartz created this Life Tributes page to make it easy to share your memories.

The funeral service for Howard Schwartz of Cambridge, MN, and...

Send flowers to the Schwartz family.