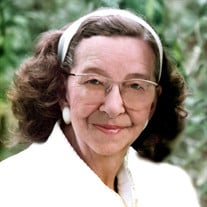 The funeral service for Irma Allen of Wadena will be held at 10:30 a.m. on Tuesday, May 25, at the Joyful Spirit United Methodist Church (United Church of Christ building) in Wadena, with Pastors Kevin Gregory and Amy VanValkenburg presiding. A visitation will held at the Johnson-Schuller Chapel in Wadena on Monday from 5:00 until 8:00 p.m. and will resume at the church on Tuesday from 9:00 a.m. until the time of the service. Just days after celebrating her 101st birthday, Irma passed away with family by her side, on May 18, 2021, at her home in Wadena, MN. Irma Lois Vanderhoef was born to Norman John and Grace Matilda Albertina (Bergen) Vanderhoef on May 5, 1920, in her parent’s home in Wadena, MN. After graduating in 1938 from Wadena High School she began playing the church organ and providing piano lessons. By 1942, she received her degree at Moorhead Teachers College, eventually teaching in Verndale, Hewitt and in Menahga (10 yrs). Irma was united in marriage with Gene Allen on July 14, 1946, at her parent’s home. They resided in Wadena and began enjoying summers at their cabin on Stocking Lake near Menahga in 1962. Teachers are a gift and touch our hearts forever. Irma’s musical talent blessed hundreds of children and adults with guitar, organ and piano lessons, guiding many of them in the MN Music Teachers Association contests. Over the years, she directed the Wadena City Band, played for Rotary (30 yrs), hosted piano recitals at her home and at church, and was the founder and handbell director at the United Methodist Church (30 yrs). She was a member of the American Legion Auxiliary, and Order of Eastern Star #114. Preceding Irma in death were her husband of nearly 73 years, Gene (7-9-2019); parents, Norman and Grace; siblings Louise Lundstrom, Frank Vanderhoef, Edna Lamson and Carrie Lindblom; and in-laws Clarence and Cecile Allen. Memories of Irma will be held dear by her daughters, Norma Jean Allen and Marilynn (Tony) Uselman both of Wadena; 6 grandchildren and 11 great-grandchildren. Serving as casket bearers will be Allen Uselman, Dustin Cantrell, Isaac Bard, Josh Harrison, Kyle Davis and Pastor Kevin Gregory. Burial will be next to her husband in Wadena Cemetery, Wadena, MN.

The funeral service for Irma Allen of Wadena will be held at 10:30 a.m. on Tuesday, May 25, at the Joyful Spirit United Methodist Church (United Church of Christ building) in Wadena, with Pastors Kevin Gregory and Amy VanValkenburg presiding. A... View Obituary & Service Information

The family of Irma Allen created this Life Tributes page to make it easy to share your memories.

The funeral service for Irma Allen of Wadena will be held at...