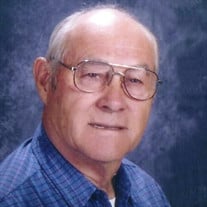 The memorial service celebrating the life of Ivan “Pete” Voeltz, Jr, of Staples, will be held at 11:00 a.m. on Friday, July 26, at the Thomastown Covenant Church in rural Staples. Visitation will be held on Thursday at the Verndale Chapel from 6:00 until 8:00 p.m., and will resume at the church on Friday from 9:30 a.m. until the time of the service.   Ivan “Pete” Erick Voeltz was born to Ivan E. and Mata M. (Klindt) Voeltz on June 17, 1927, in Lockhart, MN. After moving from MN to ND to SD, in 1935 the family moved to Verndale, MN. He graduated from Verndale High School in 1945 and right out of high school started farming and working other jobs. He served in the US Army from 1951-1953, as a military police officer in Panama. After his discharge he returned to farming and working with family members on their farms, when he met and later married Janice Geiger in June 1955.   Ivan farmed for most of his life on a farm outside of Staples – some dairy, beef and grain, a few pigs and chickens thrown in. Outside employment over the years included logging, construction laborer and driving Head Start bus for many years. He always had something he was tinkering on to fix up. He and Janice were faithful, active members in their church. He ushered, helped with maintenance and cleaning, and served on leadership boards. Ivan and Janice served together as children’s Sunday School teachers. Sharing out of what they had (from garden produce to offering rides to church) was always a priority. He also served as a 4-H leader while their children were in elementary-high school. Ivan was a Staples FFA Honorary Chapter Farmer in 1974. Hearing what his 4 children, 12 grandchildren and 24 great-grandchildren were up to was always very important to him.   Ivan lived the last three and half years at Lakewood Pines and received care from the Lakewood System Staff at the Care Center, Assisted Living, Palliative Care, along with Home Care and Hospice staff. He was known for his graciousness and gratefulness for the care they provided. In those years he enjoyed reading, watching the birds, and riding his bike.   Ivan, 92, of Staples passed away at Lakewood Care Center, Staples, on July 4, 2019.   Ivan is survived by son, Mark of Minto, ND; daughters, Julie Carlson of Minnetonka, and Becky (Bruce) Fuhrman of Staples; grandchildren and great-grandchildren, sister, Wilma Johnson of Seven Bays, WA, brothers, Gordon of Muscatine, IA, and Manuel (Ruth) of Staples; along with many other family members.   He is preceded in death by his wife Janice on April 27, 2018; parents, Ivan Sr and Mata; brother, Russell; and son Don.   Memorials preferred to Thomastown Covenant Church and Smile Again Ministries. Burial will be in Evergreen Hill Cemetery, Staples, MN.

The memorial service celebrating the life of Ivan &#8220;Pete&#8221; Voeltz, Jr, of Staples, will be held at 11:00 a.m. on Friday, July 26, at the Thomastown Covenant Church in rural Staples. Visitation will be held on Thursday at the Verndale... View Obituary & Service Information

The family of Ivan "Pete" Voeltz Jr. created this Life Tributes page to make it easy to share your memories.

The memorial service celebrating the life of Ivan “Pete” Voeltz,...

Send flowers to the Voeltz family.