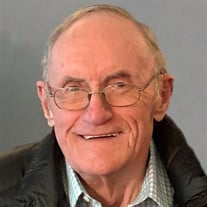 The funeral service for James Kohnen of Bertha will be held at 11:30 a.m. on Saturday, March 30, 2019 at St. Paul’s Lutheran Church in Bertha with Reverend Blake Rickbeil presiding. A visitation will be held at the church on Saturday from 9:30 a.m. until the time of service. James, age 80, passed away on March 20, 2019, while in Truth or Consequences, New Mexico. James Allen Kohnen was born in Wadena, Minnesota on December 23, 1938 to Hilda (Anderson) and Hobart Kohnen. His father died suddenly when Jim was 17 and he immediately took over management of the family farm in Bertha. Hilda remarried Otto Weickert in 1962 and he was a great step-father to Jim. In 1961 Jim met his first love, Evelyn Raaum at the Clarissa Ballroom. They got to know each other on the dance floor and were married on June 16, 1962. They enjoyed 39 years together before cancer took her too soon in 2001. They raised 2 sons, Todd and Kevin. Jim had a 40-year career in the creamery management business. Everyone was greeted with a smile and a joke about Sven, Ole or Lena, followed by Jim’s deep laugh. He was involved heavily in community service. He was a member of the Chamber of Commerce, on many boards at Zion Lutheran Church, and on the original board of SANTA (Springfield Area Nativity Association); bringing the first ever live nativity pageant to Springfield and it is still going today. He also served on many church boards over the years. In 1993 Jim and Ev moved to Alexandria as Jim took a job managing the Nelson Creamery to live out his dream of owning a lake home. He enjoyed many years in that home watching his grandchildren grow. He loved pulling them around the lake for water skiing or tubing, and teaching the kids how to fish. When Ev passed away, Jim met Glenda Rach, who was also widowed. They were married on February 2, 2002. Jim moved to Glenda’s home on the farm. Soon after he retired from his career in the creamery business. He took up a hobby refurbishing tractors. He also spent many hours in the woodshop creating treasures for family and friends and loved “keeping up” the yard and grove. He always had a project going. Jim and Glenda delighted in 17 years together. They enjoyed traveling, camping, road trips and going south in winter that they were both healthy. He was a man of simple pleasures getting his coffee in Hewitt each weekday, playing cards with friends, and helping others when they needed an extra hand. Jim was preceded in death by his parents and wife Evelyn. Jim is survived by wife Glenda, sons, Todd (special friend Jill McIntire), Kevin (Tammy); grandchildren, Daniel (Erin) Wersal, Nicole (Alexander) Warfield, Mackenzie Kohnen, Jordan, Katie and Michelle Kohnen; great-grandchildren Bradley, Annie and Benjamin Wersal; stepchildren Kim (Robin) Holt, Nedda (Dan) Zetah, Jeff (Roberta) Rach; step-grandchildren Josh, Jamie and Luke Holt, Makayla Zetah, Shanel and Jason Lund, Dillon Overton, Morgan, Sydney and Alli Rach and step-great-grandchildren Ethan, Elliana and Aria Lund. Honorary pallbearers will be Dean Hetland, Ervin Schlichting and Marlan Weickert. Active pallbearers will be Dan Wersal, David Klabunde, Alan Anderson, Bill Kern, Josh Holt and Rodney Carpenter. Burial will be in Geneva Cemetery, Alexandria, MN.

The funeral service for James Kohnen of Bertha will be held at 11:30 a.m. on Saturday, March 30, 2019 at St. Paul&#8217;s Lutheran Church in Bertha with Reverend Blake Rickbeil presiding. A visitation will be held at the church on Saturday from... View Obituary & Service Information

The family of James Kohnen created this Life Tributes page to make it easy to share your memories.

The funeral service for James Kohnen of Bertha will be held at...

Send flowers to the Kohnen family.